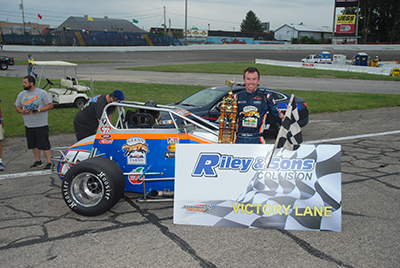 Two of the hottest sprint car drivers matched wits in the 20th running of the Glen Niebel Classic with Kody Swanson emerging as the victor. Swanson and Tyler Roahrig battled throughout the 125-lap race at Anderson Speedway Saturday for the CB Fabricating Glen Niebel Classic presented by Intersect.

Swanson set fast time in qualifying with followed by a tight pack. Eleven of the 19 entrants qualified within a half-second of Swanson’s time. As a result of the invert Billy Wease jumped into the lead chased by Chris Neuenschwander and Tyler Roahrig. By lap 25 Dakoda Armstrong had advanced to third followed by Swanson and Roahrig. Roahrig made a gutsy outside pass of Swanson on lap 31 coming off the fourth corner and moved into the second spot on lap 41. The red flag waved when Doug Fitzwater made heavy contact with the turn two outside retaining wall, his second trip into the concrete during the night.

The chess match between Swanson and Roahrig continued on the lap 59 restart when Swanson took advantage of traffic and moved back into the second spot. At the halfway point Wease’s night came to an end with an apparent suspension problem on the right front. That put Swanson on the point. For the next 62 circuits around the high banked quarter-mile oval Roahrig ran in the tire tracks of Swanson looking both high and low to make the pass. The third and final caution flag waved on lap 95 when Jacob McElfresh spun on the back straight following contact with Emerson Axsom.

Roahrig continued to hound Swanson as the leaders tires were starting to falter and he was pushing up in the corners. Swanson won the Glen Niebel Classic for the second time by .268-seconds over Roahrig with Caleb Armstrong, Bobby Santos III and Kyle O’Gara rounding out the top five. O’Gara’s run was impressive after starting 11th in the field.

In the first full-size pavement Midget race at the track in ten years, O’Gara won the rain shortened event over Swanson with Dalton Armstrong coming home in third. Nick Hamilton led the first two laps before giving way to Armstrong with O’Gara running third. O’Gara grabbed the second spot on lap nine with fast qualifier Swanson claiming the third spot a lap later. Following a restart O’Gara was able to get underneath Armstrong on lap 19 on the front straight to take the point with Swanson moving into the second spot on lap 26 with an inside pass entering turn one. Rain brought the contest to an end after 38 of 50 laps.

Greenfield’s Doug Dugger made it back to back wins in Thunder Roadster action with Jason Powers and Austin Cory rounding out the top three.