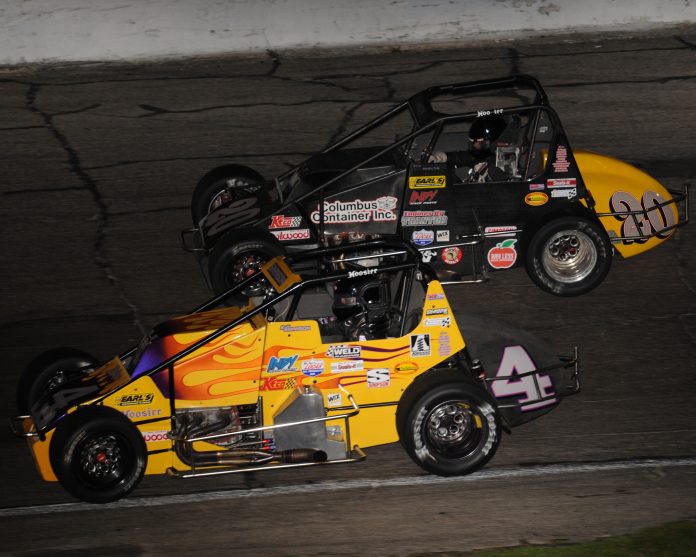 Swanson and Hamilton Team up for Thursday Night Sprint Race

Gene Nolen will have two Pay Less Little 500 presented by UAW-GM past winners pilot his sprint cars for UAW Night at the Races presented by Speedway Indoor Karting. Kody Swanson and Kyle Hamilton will be piloting the two V6’s. This is the second installment of Thursday Night Sprints at Anderson Speedway after the first was on July 5th.

Kody Swanson has seen victory lane on multiple occasions in 2018. He is currently tied with Jack Hewitt for the most wins in the USAC Silver Crown Series. He will be looking to break the tie at Salem Speedway on August 11th. He has won at Indiana State Fair Grounds, Lucas Oil Raceway, Toledo Speedway, and Madison International Speedway. Swanson was able to win his second Pay Less Little 500 presented by UAW-GM in May. That was Gene Nolen’s first win in the Little 500. In the first Thursday Night Sprint race on July 5th, Swanson finished 3rd to Aaron Pierce and Chris Neuenschwander.

Kyle Hamilton will be joining Nolen Racing for the first time in 2018. He made his first start for the team last October for the Tony Elliott Classic. He finished 4th to winner Aaron Pierce. Hamilton’s 2018 season has so far been one he would like to forget. He has been running the USAC Silver Crown pavement schedule for Bob East and Terry Klatt. The team has been plagued with mechanical issues from the start of the year. Those issues continued into the 70th Annual Pay Less Little 500 presented by UAW-GM. After a broken driveshaft on The Tin Plate Pole Day qualifying set the team behind, it forced them to attempt to bump into the field. When he did make a run on Parallax Power Supply Bump Day, his first lap was 11.476 seconds, but on the second circuit he hit the outside retaining wall in turn two ending his effort. Hamilton will be looking to use the Thursday Night Sprint race as a turning point in his season.

Thursday Night Sprints will begin with practice at 4:00pm and racing action starting at 7:00pm. The K&M Tool and Die Mel Kenyon Midgets and Legends will join the Non-Wing Sprints Cars for UAW Night at the Races presented by Speedway Indoor Karting. Adult Tickets are $15, Kids (6-12) $4, 5 and under are Free.