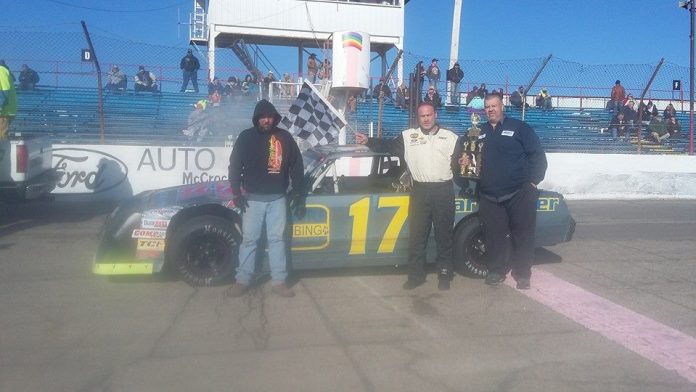 With conditions as good as they get in December, Anderson Speedway had a beautiful ending to the season for the rescheduled Turkey Bash.

The four divisions of Street Stocks, Marcum Welding Pro Compacts, Thunder Cars, and the Front Wheel Drive Figure 8’s loaded the pits and came for one last race of 2015 season.

In the 40 lap Street Stock feature, Brian Hopkins closed out the 2015 racing season with a victory. Hopkins led the event from start to finish. He had competition from the fastest car driven by Calvin Parham, but Parham was held up by Willy Dehart.

Anderson native Ricky Tharp was victorious in a close finish in the Marcum Welding Pro Compact 25 lap feature event. There was a three way battle between Tharp, Kevin Harmon, and Chris Jennings. Harmon hit the wall on lap 13, which gave the lead to Tharp. On a restart on lap 19, Jennings took the lead away from Tharp. Tharp was able to pass Jennings in the fourth turn on the final lap to take home the checkered flag.

The outside temperature might have been cold, but the battle in the ThunderCar division was hot. Curtis Chapman was the fastest qualifier, but started sixth due to the invert. Tyler Nicely, coming from Owensboro, Kentucky, led the field for 13 laps and was quickly caught by Jeremy Threet and Curtis Chapman, both of Anderson. On lap 29, contact was made between Champan and Threet due to lapped cars causing damage to both cars. In the end, Threet was able to cross the finish line first giving him the victory and his first career win.

The final event of the day featuring the Front-Wheel-Drive Figure 8’s saw Brandon Dalton bring the field to the green flag. Dalton was swiftly passed by the 5 of Mike Alley. The crossover became a problem for the leader, as Alley maneuvered around Ron Phipps causing him to lose his lead to Nick Warner. Nick Warner was able to pull away from the field to capture the checkered flag and celebrate in the AutoFarm McCrocklin Ford Winner’s Circle.

Anderson Speedway will start the 2016 racing season on March 26 with the Late Models, Pro Compacts, and ThunderCars. A full 2016 racing schedule can be found at www.andersonspeedway.com.