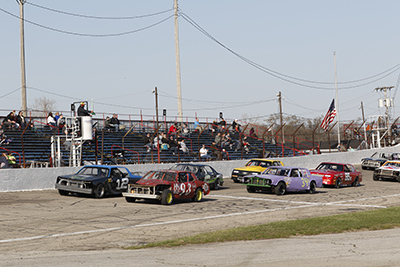 Through the first few weeks at Anderson Speedway there have been seven different drivers that have claimed feature wins. This Saturday is Spring Championship night presented by Byrider with the McGunegill Engine Performance Late Models topping the racing card.

Former division champion Jeff Marcum captured the victory in the 75-lap race for the Champion Racing Association Sportsman Late Models. Ronnie Rose won the first race for the division by holding off Marcum for most of the race winning by less than two-tenths of a second. James Kirby III scored a podium finish in the CRA race and was running in the top three a week ago when a broken front suspension sent him into the outside retaining wall.

Elliott McKinney won the most recent Marcum’s Welding Front Wheel Drive feature by keeping Nick Warner from taking the victory with a winning margin of less than half a second. Visiting Ohio driver John Sage won the opening race for the division.

The Legends Division will be making their first appearance of 2021.

Qualifying is set for 6 p.m. with racing at 7:30 p.m. Adults tickets are $12, children at $5 and children five and under are admitted free.