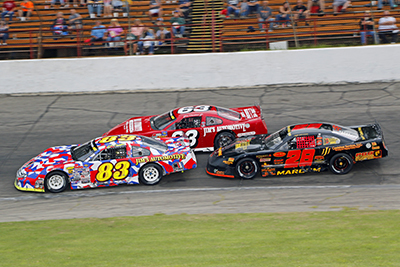 Five drivers will be hoping to maintain their season point advantage during Season Championship night at Anderson Speedway.

The Byrider Season Champions night will be a double points night and will include the annual parade of the Murat Shrine Club.

Coming off a victory in the Champion Racing Association Sportsman Late Model Cintas 100 Muncie driver J.P. Crabtree has a 47-point lead over his father Jim Crabtree.

Defending Marcum’s Welding Front Wheel Drive champion Elliott McKinney has overcome some problems this season to hold a 37-point lead over Terrill Willhoite with Cody Riley just another seven-points back.

Kirby enters the Season Championship night with a 67-point advantage over Ricky Craig.

James Mikesell is looking for his first championship in the Vintage Wrench Ford Division, but leads Allen Wagner by only 37 markers with Jared Keller 44 points back.

Doug Dugger is seeking his second championship in the past three years in the Thunder Roadsters. He has a 76-point margin over Austin Cory.

Dugger will be seeking his fourth feature win in 2022, while Cory is hoping to visit the Riley & Sons Victory Lane for the first time this season.