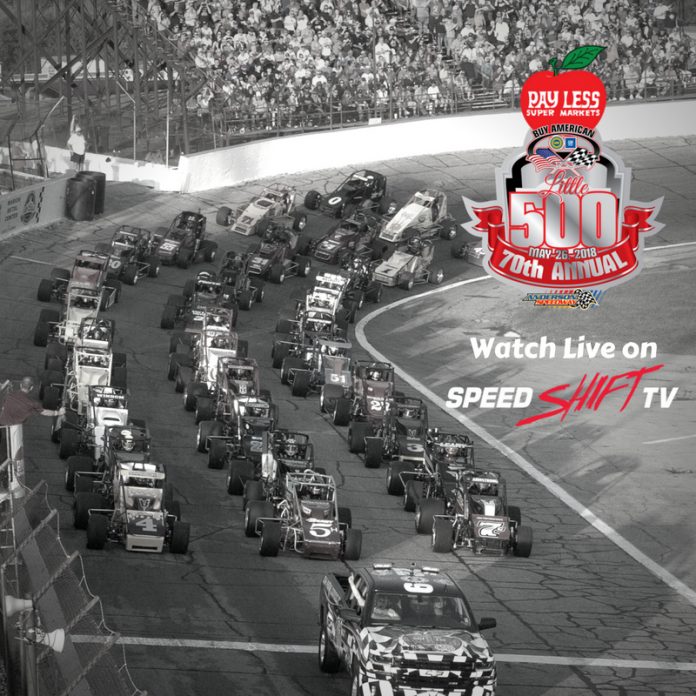 Anderson, Indiana (May 16, 2018): Action Entertainment officials have announced that the Pay Less Little 500 presented by UAW-GM will be shown live on Speed Shift TV. Speed Shift TV is one of the premier organizations in bringing pay-per-view online streaming to race fans. In addition to the Pay Less Little 500 presented by UAW-GM, they will also show live the Thursday Night Sprint Races throughout the summer.

“We are excited to give fans an alternative way to watch the race if they can’t witness the race in person,” said Jared Owen, Vice President of Operations. “It gives fans a chance to see the race all over the world.”

Through the partnership with Speed Shift TV, they will also be bringing live coverage of the Tin Plate Fine Food & Spirts Pole Day and the Parallax Power Supply Bump Day. This gives fans the chance to catch the exciting action if they can’t make it to the track. This coverage will be shown FREE through Facebook on the Speed Shift TV page.

During, the past couple years, car counts have continued to rise which has added to the excitement of both Pole Day and Bump Day. Currently there are 47 cars entered into the 70th Annual Pay Less Little 500 presented by UAW-GM. Last year during qualifications, the crowd saw two-time winner Brian Tyler jump out of his car and run back to the pits to jump into his back up car. This is the excitement that we want to be able to bring to fans.

The Little 500 is truly a unique event, with a long history,” explained Darren Shanley, Speed Shift TV. “You don’t see this on track action at any race in the country. We are excited to bring the race to the world for those that can’t be there!”

Speed Shift TV broadcasts over 200 short track races across the United States each year. They predominantly are known around the dirt tracks in America but take on one pavement track each year. That one track happens to be Anderson Speedway.