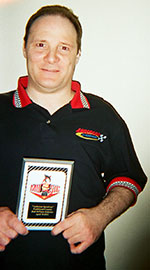 Retired Hall Of Fame Songwriter Steve Wallace’s song “Anderson Speedway” has made its way in The National Lets race magazine Available nowwww.letsracemag.com.The song sung by Mark Sutton of Nashville, Tenn. Is now currently number 1 in over 100 countries Worldwide and has won over 70 awards for 2013-2014.

The streaming royalties from the song have reached over 300 dollars for the Month of April and was donated to the American Cancer Society. You can win your very own Limited Edition CD Single of the song on “Track Talk” hosted by Rick Dawson Gary Mong which airs every Tuesday night from 6-6:30PM on AM1240 WHBU and Fox Sports Radio 102.9 FM in Muncie, Ind.

You can still hear the song at Wallace’s webpage athttp://www.songramp.com/homepage.php?userid=7892 orhttp://soundclick.com/share.cfm?id=12159502