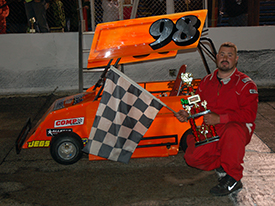 Kenny Smith had a perfect night at Anderson Speedway recording his second feature win in Super Karts action last Saturday.Smith for the second time set fast time during qualifications, won a heat race for the first time this year and repeated as the feature winner.He took the lead on the second lap with a nifty pass entering turn one of Brad Kares with David Reynolds in tow.From there Reynolds stayed glued to the back of Smith’s kart, but was never in a position to make the pass for the win. Smith won by less than a second over Reynolds.Jason Reynolds was able to pass Dustin Kares for third.The first heat race was a preview of what the feature would look like with Smith and David Reynolds battling for the lead.Smith led the first eight laps when Reynolds made the pass going down the back straight entering turn three. But on the final lap Smith returned the favor for the victory.David Reynolds finished second with Jason Reynolds rounding out the top three.Angie Goodin recorded the victory in the second heat race never relinquishing the lead and pulling away from the second place battle between Cody Rinehart and Michael Goodin.