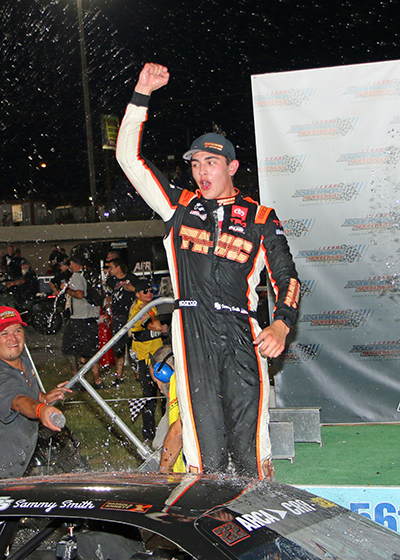 Sammy Smith, in dominating the Greg Hubler Automotive Group Redbud 400, crossed another race win off his “bucket list”. Smith led 338 of the 400 laps around Anderson Speedway on Saturday holding off his Wilson Motorsports teammate William Sawalich by 2.851-seconds. He was the second driver from Iowa to win the Redbud 400 joining inaugural race winner Iggy Katona, in the 56th running of the race presented by Mitch Smith Automotive and Perfecto.

The three Wilson Motorsports teammates of Sammy Smith, William Sawalich, and Cole Butcher led all 400 circuits around the high banked quarter-mile oval. Several of the expected contenders didn’t make it to the halfway point of the race with Casey Roderick, Jesse Love, Casey Johnson and Dalton Armstrong falling by the wayside as a result of mechanical woes or contact.

“Winning the Redbud ranks pretty high,” Smith said. “There are five or six crown jewels that I want to win and this makes three of them so far.” Smith finished second in 2021 to winner Kyle Crump and third in 2020.

Sawalich took the lead from the pole position after setting fast time in qualifying and was chased by Smith who started on the outside of the front row. Smith took the point on lap 54 following a restart with an outside pass of Sawalich on the front straight. The two teammates ran one-two for the next 223 circuits when the leaders stopped for the first time after Love made contact with the outside retaining wall in turn two. That gave Cole Butcher the lead, but on lap 232 Smith and Logan Beardon went past Butcher using the high groove on the back straight.

The final caution flag waved on lap 349 for a competition yellow after 75 consecutive green flag laps, but Smith, Sawalich and third place running Stephen Nasse elected not to stop. From there Smith went onto the victory while Sawalich battled a left front tire going down. Crump came home third followed by Nasse and Beardon, the only cars on the lead lap.

“The flat left front impacted our effort over the final ten laps,” Sawalich said “We struggled in practice, but the crew worked to get the car better.”

Crump said something broke before qualifying, which put the team in a deep hole. “We had to take left sides early, because we didn’t know what the issue was,” he said. “That put us off cycle and having to battle through the field, used my stuff up.”

Bubba Pollard lost two laps early in the race with an apparent suspension problem, but by lap 264 was back on the lead lap. Pollard appeared to be riding comfortably and saving his tires when he pitted on lap 294 when the hood popped up and he retired for the night, credited with a tenth place finish.