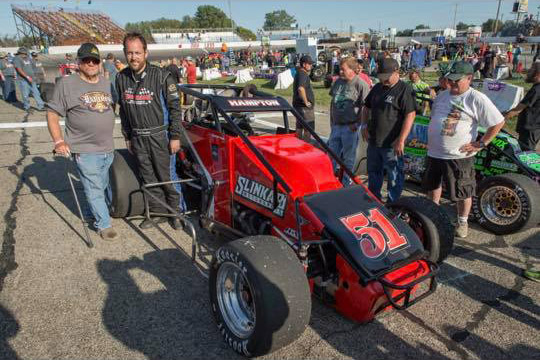 “My dad was the fuel guy with Jack French and Eric Gordon in the 2000’s,” explained Scotty Hampton. “I got to see my dad in victory lane, and since then I have wanted to be in that same spot as him.”

Hampton has been a regular competitor in the Little 500 making the last seven consecutive races. The first six of his starts have come with Kokomo, Indiana’s Jerry Powell as the team owner. Hampton’s best finish with Powell came in 2018 where he finished in the 5th position. The past two starts came with Auto Mechanic and Junkyard owner, Ted Slinkard.  Slinkard is an Army Veteran who was burned while serving in the military.

“Many people ask me if I received these burns on my face in a racecar,” explained Ted Slinkard. “No, these happened while I was uniform. I don’t regret the time I served in the army at all, they (Army) have taken great care of me. I could sell the army to anyone!”

Ted Slinkard, a successful businessman in the junkyard and auto mechanic businesses, helped propel his racing obsession. Slinkard started racing go karts and TQ midgets in the 60’s & 70’s. A 1988 crash in a Late Model sidelined Slinkard from the driver’s seat. Since then, he has been an owner with teams competing in many forms of racing including Sprint Cars, Silver Crown Cars, and Midgets. The likes of Tracy Hines, Eric Gordon, Terry Goff Jr., Isaac Chapple and grandson Boomer have all driven for Slinkard. Starting in 2018 Scott Hampton got hooked up with Slinkard.

“While I was racing with Jerry (Powell) at North Vernon (Rock Crest Raceway) in 2017 we were parked next to Ted (Slinkard),” explained Scotty Hampton. “We started talking and it led me to a two-race deal in 2018. Ted wanted to run more (than two races) but I wanted to prove myself first.”

Since the relationship started in 2018 it has transformed into a dirt and pavement sprint car program. They were able to win their first race together at Rock Crest Raceway in North Vernon, Indiana in 2019.

In May of 2019, Slinkard acquired a beast chassis from veteran sprint car competitor Tom Paterson. The team went to work on preparing the car for the 2020 Little 500. The maiden voyage for with the car was the 2020 Glen Niebel Classic. They finished in the 12th position at the Glen Niebel Classic.

The 2020 Little 500 was a roller coaster of emotions for the team. The team fought engine problems the entire week. They were able to get the engine to stop smoking and qualified in the 17th position. In the race the engine expired on lap 424, eliminating the car from the race in the 15th position.

The team returned with a newly built Evan Jackson Racing Engines Motor for the 2021 Little 500. Without engine as an issue, the team was able to focus on setting up the racecar. Hampton qualified the car in the 15th position, below his goal of the first three rows.

“I don’t race enough on pavement to qualify well,” said Scott Hampton. “There is a lot of pressure in Little 500 qualifying. You aren’t just putting one lap together but, four consecutive laps.”

After a mid-pack starting position, Hampton started making progress forward in the race. After going off pit sequence with the leaders, Hampton inherited the lead and led 19 laps. The abundance of cautions aided the front running cars, and they were able to pit later. Hampton was still able to achieve a career best 4th place finish.

The team has a great sense of optimism and cohesiveness as it enters the 74th Annual Lucas Oil Little 500 presented by UAW. Both Ted Slinkard the owner and driver Scott Hampton echoed the same thoughts.

“Ted is a straight shooter,” said Scott Hampton. “When I race for Ted I don’t have any pressure. We are there to win, but we are also there to have fun. That is the most important.”

“Scotty tells you the truth if you want to hear it or not,” said Ted Slinkard. “He doesn’t mix his words. If we have a problem, we work it out.”

Also joining the team is Denver’s Garage Pizza & Brews located in Fortville, Indiana. A 1956 Service Station has been transformed specializing in pizza and beer. In addition, they offer breadsticks, wings, and a delicious brookie (Brownie/Cookie) for dessert.