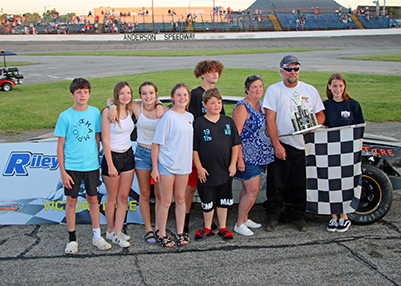 Defending Noble Wine & Spirits ThunderCar champion Jimmy Kirby captured the feature event last Saturday night. The closing 11 laps saw a lot of bumping and banging among the front runners. Randy Owen took the early lead chased by Ricky Craig and Ron Phipps. James Kirby III, who set a new track record during qualifying, moved up to the second spot by lap four. Phipps assumed the lead when Owen was black-flagged for bettering his qualifying time on three consecutive laps and was sent to the tail of the field on the 12th circuit.

Kirby III ran in the tire tracks of Phipps for the next 12 laps with Jimmy Kirby running third followed by Craig and Owen. Kirby III made contact with Phipps in turn three on the 24th circuit which caused the leader to spin and both drivers getting relegated to the tail of the field. That gave Jimmy Kirby the lead, but on lap 25 Kirby III spun on the front straight, coming to a stop in turn two. His night ended when his car failed to start.

Jimmy Kirby won over Craig by 2.4-seconds with Phipps, Owen and Dennis Hayes rounding out the top five. It was Kirby’s second win of the year, equaling the number of feature wins for his son.