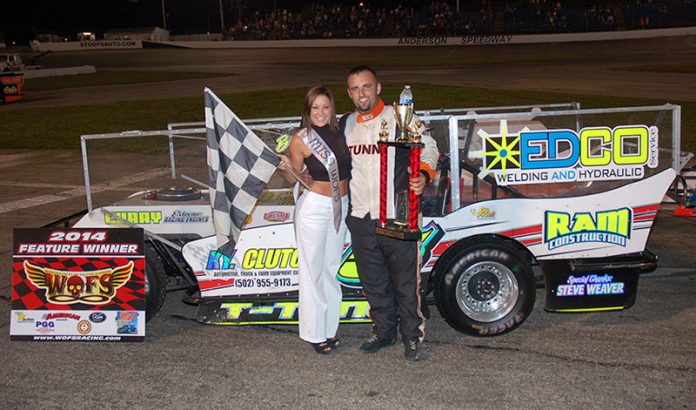 Ben Tunny is no stranger to winning at Anderson Speedway adding the 65th running of the National Crown to his resume on Saturday.

Tunny set fast time and led all 100 laps to record his sixth career win at Anderson Speedway. Tunny becomes the first driver to win the National Crown and the three-hour Figure-8 championship.

But it was not an easy win for Tunny with Mike Hadley Jr. never more than a couple of car lengths off the back of the leader’s car.

In the waning laps the two leaders had to take evasive action in the crossover.

Hadley kept waiting for Tunny to make a mistake, a mistake the veteran campaigner never made.

The race was red-flagged twice in the first 25 laps for incidents in the crossover. The first took place on lap 15 when Randy Pence hit the back of the car of Jedi Cluxton. On lap 25 Curtis Chapman and Danny Turner had hard contact in the crossover.

After finishing in the runner-up position in three consecutive events, Doug Dugger finally found the Tim Thompson Nationwide Insurance Winner’s Circle holding off John Robbins by a tenth of a second to win the Thunder Roadster feature.

Dugger took the lead from Mark Dietzen on the seventh circuit and eight laps later Robbins was able to move into the second spot.

Robbins tried several times to get inside of Dugger but was never able to complete the pass. Dietzen held on to record the podium showing.

Gary Eaton Jr. surrendered the lead for Ron Masters on a restart on lap 19 but was able to return the favor on lap 26.

Eaton raced side by side with Masters following a restart on lap 11 and the two ran nose to tail. After Masters took the lead, Eaton was able to get inside on the front straight for the victory. Tommy Bigelow finished third.

Nick Warner made it four consecutive wins and the eighth of the season in Front Wheel Drive Figure-8 action.

Warner took the lead from Derick Bradshaw on the fourth laps with an inside move on the back straight as Bradshaw’s car experienced a mechanical problem.

From there Warner was unchallenged for the win with Kamden Creek and Randy Owen rounding out the top three.