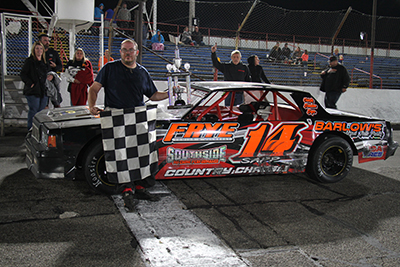 It was a night of good and bad luck for several drivers at Anderson Speedway this weekend. Johnny Magee led 95 of the ThunderCar 100 lap Star Financial feature before losing an engine that allowed Dustin Sapp to record the victory. Sapp was able to hold off Shawn Cullen by .278-seconds for the victory with Dylan Hoppes coming home in third. Cullen only got back on the lead lap when Magee’s engine expired. Jameson Owens and Magee rounded out the top five. Sapp and Cullen twice made contact during the night while battling for position on lap 40 and again on lap 89.

It was a similar situation in the Marcum’s Welding Front Wheel Drive feature where Ronnie Constant seemed poised to score his first feature victory. Constant found himself in the lead after Trevor Lane tangled with the lapped cars of Douglas Smith and Terrill Willhoite. On the restart Trevin Henson, running second at the time, got loose and made heavy contact with the turn one wall. When action resumed Constant was able to open a gap on Kyle Tabor, but the driver making up ground was Shane Reed. Reed moved into the second spot on lap 16 and when Constant experiencing an engine problem slowing dramatically Reed took the lead on the final lap. Tabor finished second followed by Constant, Elliott McKinney and David Powell.

Good luck was with Doug Dugger in Thunder Roadster action after having to install a new axle following a practice incident. With the car repaired Dugger edged out Chad Cory and Jason Powers during qualifying by only .145-seconds separating the top three. Starting from the pole position Dugger jumped into the lead but on the opening lap brad Kendall made contact with the turn two wall. Dugger took the lead over Cory and Powers when on lap 14 Cory’s car lost a tire and he made contact with the back straight wall. From that point Dugger won by .322-seconds over Powers with Austin Cory coming home in third.