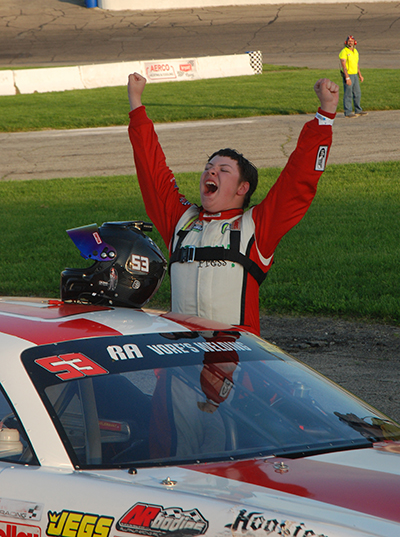 For most of the Thunder Car feature Dustin Sapp turned down a number of challengers to score his first feature win of the season. Sapp set fast time for the Byrider Spring Championships at Anderson Speedway on Saturday and led from start to finish but the outcome hung in the balance until the end.

Five times during the PGG Enterprises feature the Community Hospital caution flag waved and that gave Kevin Rabenstein the opportunity to challenge for the top spot. On every restart Rabenstein, and early in the race, Robbie Wyman, attempted to use the high groove to take the point. This resulted in side by side racing among the top five drivers. Wyman’s night ended on lap 19 with an overheating problem. Early in the race David McConnell and Ron Phipps were in contention. Phipps lost an engine on lap 21 bringing out the final caution. Sapp held off Rabenstein by .29-seconds to record the win followed by McConnell, Earl Adams and Dylan Hoppes. Adams started 11th in the field.

Teenager Zachary Tinkle captured his first McGunegill Engine Performance win after an early caution scrambled the field. Kent Baledge, the fast qualifier, took the lead at the start chased by Tinkle with defending champion Jeff Marcum running fourth. By the third circuit Marcum got inside of both Tom Miller and Tinkle and started to challenge Baledge for the lead. With both cars loose in the corners, the two leaders got together on the 13th lap entering turn three. Marcum’s ride hit the outside retaining wall, ending his night. Baledge changed a right front tire and returned at the tail of the field. That put Miller in the lead, but Tinkle was able to take the point on lap 17 with an inside pass exiting turn four. Baledge moved into the second spot on lap 23 and was attempting to close on the leader. Tinkle maintained the point by turning laps that were equal to the circuits turned by Baledge to win by a half-second. Miller finished third followed by Brian Morrow and Tanner Ballard.

Knightstown driver Alex Abbott won his first ever feature in Marcum’s Welding Front Wheel Drive action holding off a rapidly closing Ricky Craig over the final circuits. Abbott started on the outside of the front row for the feature and immediately moved into the lead. Craig passed Devin Lane for the second spot on lap 15 and set his sights on Abbott. Craig tried to use the high groove to take the lead but Abbott was able to maintain his momentum for the victory. Abbott’s margin of victory was three-tenths of a second over Craig with defending champion Randy Owen coming home in third.

Michael Waltrip to race on the High Banks of Anderson Speedway