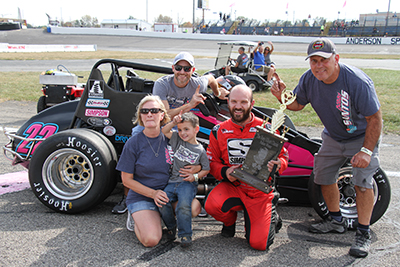 Bobby Santos III closed out the 2020 sprint car season with a victory in the 5th annual Tony Elliott Classic at Anderson Speedway.

Santos started fifth in the 125 lap feature taking the lead from early leader Chris Neuenschwander on lap 29 with an inside pass coming off the fourth corner. The first caution flag waved on lap 7 when Jacob McElfresh made contact with another car on the front straight and made contact with the outside retaining wall. Tyler Roahrig looking to three-peat in the Elliott Classic moved into the second spot on lap 30 and by lap 38 Kody Swanson moved into the third spot. Roahrig avoided near disaster after making contact with Doug Fitzwater in turn four but both drivers were able to continue. With Santos and Roahrig running out front there was a tight battle for third through fifth positions among four drivers all looking for the opportunity to advance.

Near the halfway point with Santos contending with lapped traffic it was the best opportunity for Roahrig to grab the lead. Coming off the second corner Santos momentarily made it three wide on exiting and was able to keep Roahrig behind him. The final caution flag waved on lap 116 when Rob Keesling spun in turn four setting up a five-lap shoot-out. Santos went on to win by .512-seconds over Roahrig followed by Swanson, Armstrong and Travis Welpott.

Sam Hinds did all he could to claim the championship for the Mel Kenyon Midget Series championship, but came up short. Hinds entered the final race at Anderson Speedway on Saturday 47.5 points behind Colin Grissom. Hinds set fast time, won his heat race and led all 30 laps of the feature, coming up 15 points shy of catching Grissom. Grissom qualified third, finished second to Hinds in the heat race and came home third in the feature. “Once I got behind Dameron (Taylor), I just wanted not to crash,” Grissom said. “I knew going into the last race that I just had to stay close to Sam (Hinds).” Grissom lost the 2019 championship by 30 points to Kameron Gladish. The 15-point difference was the closest in the history of the Mel Kenyon Midget Series. Hinds led the entire distance in the feature finishing 2.9 seconds ahead of Jack Macenko. It was Hinds third victory on the high banked quarter-mile oval in 2020 and fourth overall. Hinds was named Rookie of the Year.

Chuck Cook took the lead on lap 14 from Kyle Tabor and went on to win the Marcum’s Welding Front Wheel Drive feature. Tabor took the lead at the start chased by Tim  Page and Cook.Elliott McKinney was running third when a right front tire went flat ending his effort on lap 15. Tabor’s car also lost a right front tire on lap 18 and he made contact with the turn two wall. Page finished second to Cook with current point leader Ronnie Constant coming home third.