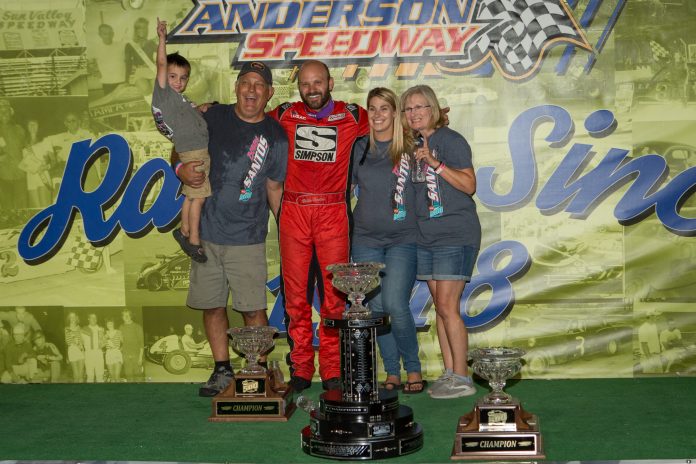 ANDERSON, IN – Pit strategy and quick work by DJ Racing team brought Bobby Santos III that long awaited for victory in the Little 500.

Santos made his final stop Saturday during the 72nd running of the Pay Less Little 50 on lap 403 emerging on the lead lap with Shane Hollingsworth and three-time Little 500 champion Kody Swanson.

Swanson slipped underneath Santos on lap 417 with an inside pass on the front straight, but his night came to an end on lap 424 with an engine problem.

With Hollingsworth leading the way, Santos on fresher tires steadily cut into the margin.

The final caution flag waved on lap 459 and when action resumed Santos was right on the rear bumper of Hollingsworth. He made the pass for the lead on lap 468 with a power move down the back straight.

Hollingworth, who last pitted on lap 339, finished second more than 7-seconds back of Santos. Tyler Roadhrig came home third a lap down.

An elated Santos praised his team as the best right after climbing from the car.

“The team gave me a great race car and did an awesome job changing tires,” he said.

“It’s unbelievable, Santos said of winning the Little 500. “I thought I should have won this thing a couple of times before.”

Santos said he knew in the waning laps that he couldn’t make a mistake as he chased down Hollingsworth.

Hollingsworth driving for Nolen Racing has finished in the top five the past three years.

“The second set of tires were not good and we knew it would be a short run,” he said of pitting on lap 339. “I just drove my heart out the last 95 laps.”

Roahrig led more than 100 laps in the middle stages of the race also said it was the need for tires that resulted in a late pit stop on lap 404.

“We had planned to stop after the 300 lap mark,” he said. “We just couldn’t seem to get any grip. We learned a lot tonight and will be back next year.”

The fans in attendance were treated to tight racing among the front runners from lap 100 through lap 200 which was a green flag run with Swanson and Roahrig on the point chased by a tight pack including Brian Gerster, Santos, Caleb Armstrong and Kyle O’Gara.

Armstrong led from lap 185 to 204 when his car rolled to a stop on the front straight. He lost several laps in the pits and was never able to recover.

There were nine lead changes among five drivers and the race was slowed ten times for a total of 92 laps under caution.