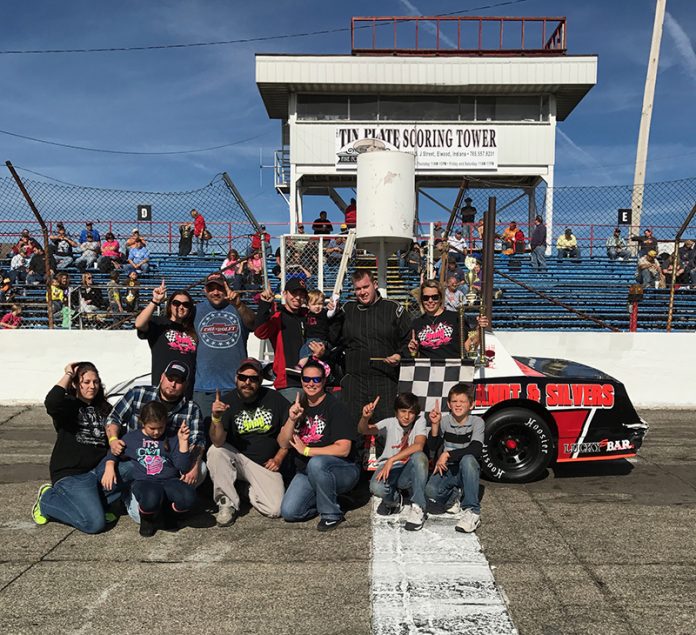 Sage took the lead from the start and was challenged early by Anderson driver Andrew Cook with Teepe climbing up to the third spot after four laps.

With Sage maintaining a comfortable lead the caution flag waved on lap 28 when Josh Ebbert spun coming off the second corner.

On the IvyTech green flag Cook got loose in turn one after making slight contact with Sage that allowed Teepe to move into the second spot.

Teepe and Sage exchanged paint on the final lap with Sage winning followed by Teepe, Travis Burge, Matt Stice and Cook rounding out the top five.

While Sage opened a comfortable lead in the middle stages of the race Stice, Burge and Jordan Hahn staged a spirited battle for the fourth spot.

Ideal weather brought out a good field of cars for the annual Turkey Bash to conclude the 2016 season at Anderson Speedway.

The Thunder Roadster division didn’t complete a lap when Rodney Oliver and Doug Dugger made contact on the back straight sending both cars into the turn three safety barrier. Both drivers appeared to suffer no injuries, but their cars were heavily damaged.

With three of his strongest competitors knocked out of the event Frankton’s John Robbins scored his sixth feature win of the season and four consecutive victory.

Following Robbins to the checkers was Mark Dietzen and Bob Lemon.

Joe Jennings took the lead from the pole chased by his son with Terry Eaton Jr. running a close third.

The lone caution flag waved on lap 12 when Zach Morris rolled to a stop in turn three.

On the restart Chris Jennings was able to use the outside line to grab the lead coming off the fourth corner.

Gossar passed Eaton with an inside move entering turn three to claim the third position.

For Swinford it marked the fifth win of the season to cap off back-to-back division titles.

Swinford was followed to the checkers by Bruce McFall and Jerry Swinford Jr.

Ricky Tharp got inside of early leader Randy Owens coming off the second corner on lap 8 to record the win in Front Wheel Drive Figure-8 action.

Tharp went on to a comfortable win followed by Owen and Elliott McKinney.