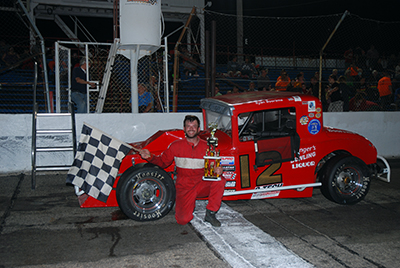 Ryan Boorsma earned the family bragging rights by besting his father to win the VROA Modified feature at Anderson Speedway.

Tom Boorsma, a five time winner in Modified action on the high banked quarter-mile oval, set fast time during qualifications on Military Appreciation Night sponsored by Double T Leather. His son, Ryan, was second quickest and as a result of the inversion they started ninth and tenth in the field. But before a lap was completed four competitors fell by the wayside as a result of a number of issues. That had John Evans leading until he slowed on lap two which gave the point to Terry Byrne. Byrne was passed by Tom Boorsma a lap later and three laps later Ryan Boorsma was running second. The caution flag waved on lap 12 when Randy Pierson made contact with the turn one wall. On the restart Tom Boorsma’s car slowed momentarily on the back straight allowing his son to take command. At the finish Ryan Boorsma collected his second career win at Anderson Speedway followed by father, Tom, Byrne, Ken Quimby and Brian Beukema.

Indianapolis driver Dustin Sapp scored his second consecutive PGG Enterprise ThunderCar feature in a race that was slowed early by five caution flags. As the result of the inversion for the 50-lap feature event, Jameson Owens and Frankie Oakes started on the front row with Oakes getting the jump at the start. Following the last caution Oakes was leading Sapp, Dylan Hoppes, Owens and David McConnell in a tight battle for position. Sapp took the lead on the restart with an outside pass of Oakes in turn one and for the next 20 laps Oakes kept the pressure up. On lap 36 Oakes night ended in a puff of smoke with Sapp then being challenged by Hoppes and Owens. At the finish Sapp won by a half-second over Owens with Hoppes, Jeremy Threet and McConnell rounding out the top five.

Defending McGunegill Engine Performance Late Model champion Jeff Marcum returned from bad night in the Spring Championship to record his third feature win of the year. Marcum took the lead from Tom Miller on the fourth circuit and was chased for most of the race by current point leader Zachary Tinkle, who settled for second place. Miller finished third.