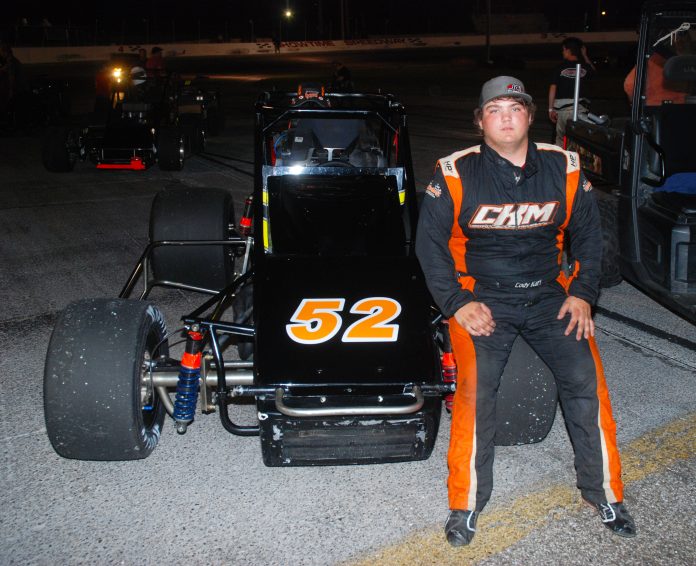 Gulfport, Mississippi driver Cody Karl recently became the sixth rookie driver to enter the 73rd Pay Less Little 500 presented by UAW. The twenty-three-old hopes to be the second-ever driver from the state of Mississippi to qualify for the Little 500.

Karl currently competes in winged 360 sprint car events when time allows at select events near his Gulfport home. But his current job as a crew member for the Jacksonville, Florida based Jett Motorsports Super Late Model team doesn’t leave many off weekends. The team travels the southeast and Midwest competing in the bigger paying Super Late Model events. Stephen Nasse has been the team’s primary driver until recently.

Asphalt sprint car racing is relatively new to Karl. He has competed in a handful of winged asphalt events at Mobile International Speedway in Irvington, Alabama and both nights of the 2020 “Dave Steele World Non Wing Sprint Car Championship 125”. Although he has personally never witnessed the Little 500 in person, he has seen a non-wing sprint car race at Anderson Speedway in the past.

Fellow Mississippi racer Terry Broadus came to the rescue and loaned Karl a motor so he could participate in this year’s event. Broadus has already entered a car he owns in the race with driver Nick Hamilton. Broadus and driver Bill Roynon won the 1976 Little 500 tune-up race here at Anderson Speedway.

”We’ve been wanting to run the Little 500” explained Karl. ”We’ve just kept it on the down low until we felt we actually had a solid race car. We’ve got our BEAST car, which we think is capable of winning, and we got with Terry Broadus and put his motor in the car. I think we’ve got a good shot at a solid finish this year. I’ve been to Anderson once, but never the Little 500. I saw a 125-lap non wing sprint car race there once”.

The Little 500 might be a race that suites Karl perfectly fine considering pit stops are nothing new. As a crewmember for Jett Motorsports, he performs them many times throughout the year. He should be able to formulate a game plan and assemble a pit crew rather easily. He alluded to the fact we might see member from the Jett team lending a hand in his Little 500 effort.

I haven’t made my mind up yet, but I don’t look for us to test any until the week of the race and try not to adjust ourself out of the ball park. I’ve got a lot of people who’ve made this possible. Unique Collision, Contract Energy Services, Spanky’s Hot Rod Shop, Jett Motorsports, HB Graphics, Savage Performance, and Deep South Excavation.

Karl realizes he has a lot to learn prior to his first Little 500 and has set realistic goals. A win would be awesome. But we’re really looking to lock into the top fifteen on qualifying day. We’ll be able to sleep a little better that night. A top ten finish I feel is a reasonable rookie effort and put it in the trailer” concluded Karl.