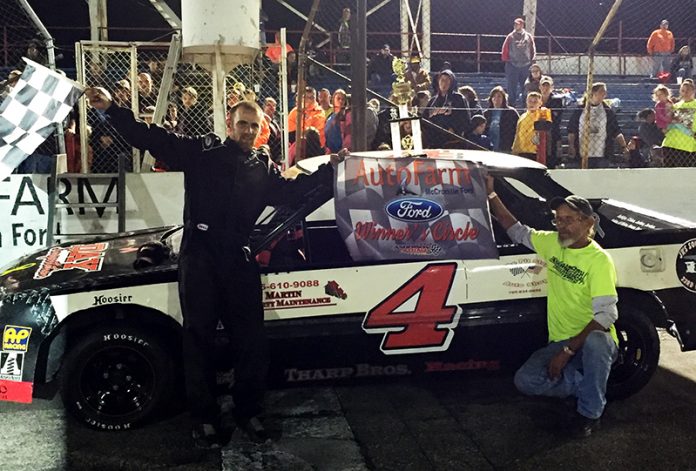 Matt Tharp scored his first feature race of the season to cap off his championship season in the Marcum Welding Pro Compact division at Anderson Speedway.

Tharp took the lead from Jeff Williams on the 15th circuit with an inside pass going down the back straight on Intersect season championships night presented by the Indy Fuel and Madison County Storm Water Quality Partnership.

With Tharp in the lead the driver making a charge was Trent Gossar, the fast qualifier who had to start on the tail of the field when a mechanical problem kept him from competing in a heat race.

Gossar moved into fifth on lap seven, was fourth after 11 circuits. He moved around Terry Neal for third on lap 17 and moved into the second spot with ten laps remaining by passing Jeff Williams with an inside move coming off the fourth corner.

Tharp won by two-seconds over Gossar with Neal, Brandon Cook and Jared Keller rounding out the top five.

For the third consecutive time Dave Osborn set fast time during qualifications for the Thunder Roadster Division and parlayed that into feature wins.

Osborn started on the pole and led all 30 laps chased by Marty Griffin.

With his fourth place finish Robbins won his second consecutive track championship in the division.

Jeff Swinford capped off a dominating season in Harts Auto Figure-8 competition setting a new track record during qualifying and then powering to his ninth win in ten feature races.

It was Jeff Swinford’s third Figure-8 championship at Anderson Speedway capturing the title in 2009 and 2004. He also won the 2015 running of the National Crown, the longest continuous stock car race in the country.