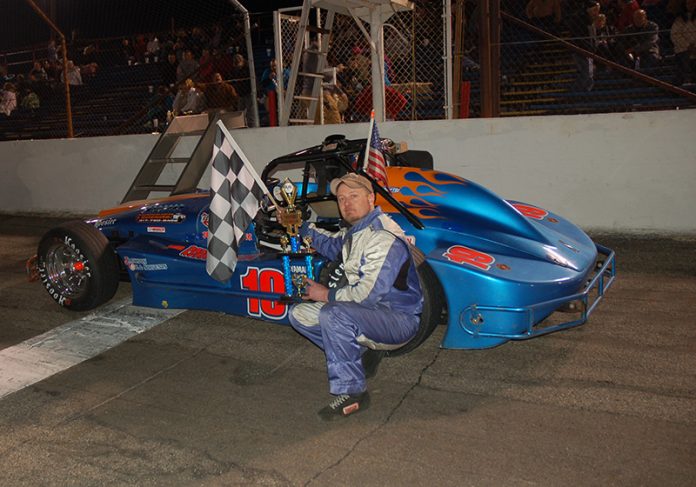 John Robbins, a four-time track champion, scored his first feature win in the Thunder Roadster division taking the lead from Marty Griffin with an inside pass entering turn three.

Holden made contact with the protective water barrels in the corner and rolled to a stop on the front straight, Osborn came to a stop in the infield and Kendall ended up in turn four.

Robbins who opened the season last week with a second place finish to Doug Dugger wasn’t going to be denied the win on Saturday.

After the restart Robbins opened a comfortable lead over Griffin and last week’s feature winner Dugger. Mark Dietzen and Rodney Oliver rounded out the top five.

“This was an easy night,” Robbins said of the win in the Kleenco sponsored Roadster. “There are not many of them.”

The Frankton driver said following the red-flag period his hands started to cramp, which was a concern.
Mark Dietzen scored his first heat victory of the season in the fast heat, but he had to hold off Robbins over the final few laps.

Dietzen took the early lead from the pole position and after the first lap Robbins was running in the fifth spot. Both Dugger and Robbins were able to move up to the third and fourth spot on the second lap with an outside pass of Griffin on the back straight.

On the next circuit Robbins used the same move to get around Dugger and set his sights on second place running Oliver.

Robbins passed Oliver at the halfway mark with an inside pass coming off the fourth corner and started to close the gap to Dietzen.

At the finish Dietzen won by less than two-tenths of a second followed by Robbins and Oliver.

Brad Kendall led the entire distance to win the second heat race, but Holden was glued to his rear nerf bar for the 10-lap distance.

Kendall won by .265-seconds over Holden followed by Osborn.