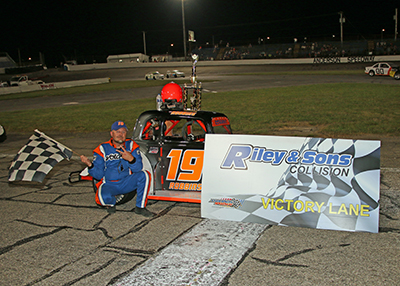 For 37 laps the winner of the 24th annual Grant Fritz/Greg Dietzen remained a three-car battle at Anderson Speedway. But at the end of the race it was John Robbins who emerged as the winner for the second consecutive year. “Winning this race means a lot to me,” Robbins said in the Riley & Sons Victory Lane. “Both Grant Fritz and Greg Dietzen were not just competitors but friends.”

Fast qualifier Dalton Conner grabbed the lead at the start with Robbins and Drew Evans all running in a tight pack Saturday on Murat Shrine Night. On three restarts Conner was able to turn back the outside challenge from Robbins with Evans waiting for someone to make a mistake. Evans claimed the second spot on lap 22 with an inside pass of Robbins with Xavier King taking over fourth with a pass of Greg Rudzik. The three top runners ran nose to tail until it was Conner that made a mistake drifting high in the fourth corner on lap 36. The slight miscue allowed Evans to get underneath and the entire complexion of the race changed on lap 37. Evans and Conner made contact entering turn three sending Conner’s car into the outside retaining wall and Evans relegated to the tail of the field. From there Robbins drove away from the field winning by 1.8-seconds over King with Austin Evans, Kyle Emberton and Rudzik rounding out the top five.

Morristown driver Jeff Marcum scored his fourth feature win of the season, but it was the battle for the second through fifth positions that were heated during the 40-lap feature. Marcum set fast time during qualifications and started eighth in the field following the inversion which put first-time competitor Joel Enochs and Nathan Greene on the front row. Enochs led the first lap but Buddy Davis took the lead on the second circuit chased by Kevin Gross Sr. and Derek Layne. Marcum climbed to the second position on lap seven and took the lead from Davis on the ninth circuit with an outside pass in turn four. With Marcum pulling away there was a spirited fight for second among Davis, Gross, John Stapleton and Mike Sargent. Gross passed Davis for the second position on lap 36 on the back straight and on the following lap spun on the back straight, sending him to the back of the lead lap. He started to advance through the field when he spun again on lap 39. On the final lap Davis slowed on the back straight and made contact with Stapleton with Kent Carson making hard contact with both cars. Marcum retained control of the race in the green-white-checker finish with Gross recovering to finish second chased by Davis.

Jimmy Kirby picked up his seventh feature win of 2021 in ThunderCar action followed by Frankie Oakes and Michael Phipps. Ohio driver Jason Powers made it back to back wins in Thunder Roadster action chased by Doug Dugger and Marshall Thompson. Anderson’s Elliott McKinney emerged as the Marcum’s Welding Front Wheel Drive winner over Ron Phipps and Colin Grissom