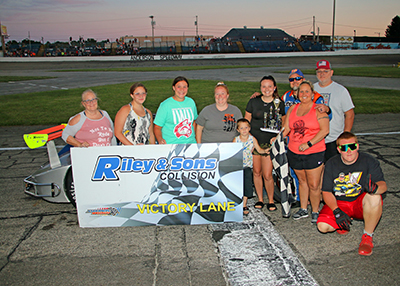 John Robbins celebrated his birthday at Anderson Speedway last Saturday by setting fast time and winning the Thunder Roadster feature. Robbins had not won a Thunder Roadsters feature since 2017 when he visited victory lane seven times and won the championship.

The initial lead was taken by Steve Holland pursued by Austin Cory and Robbins with Doug Dugger, the previous winner running outside the top five. Robbins passed Cory on the second lap and Phil Jenkins worked his way quickly into the third spot. On the 4th circuit Robbins and Jenkins passed Holland for the top two spots with Dugger cracking the top five after 10 laps. The caution flag waved on lap 13 for a spin by Holland in turn two and he was unable to continue. Dugger passed Jenkins on the restart to move into second, challenging Robbins but coming up a half-second short.

Jenkins, Cory and Brad Kendall rounded out the top five. “It’s been awhile,” Robbins said of his Thunder Roadster victory in the Riley & Son Winner’s Circle. “I was given a good car to drive and it didn’t take long to get comfortable in a Roadster again. “Ed Klingaman asked me to drive for him,” he said. “I appreciated the opportunity.”