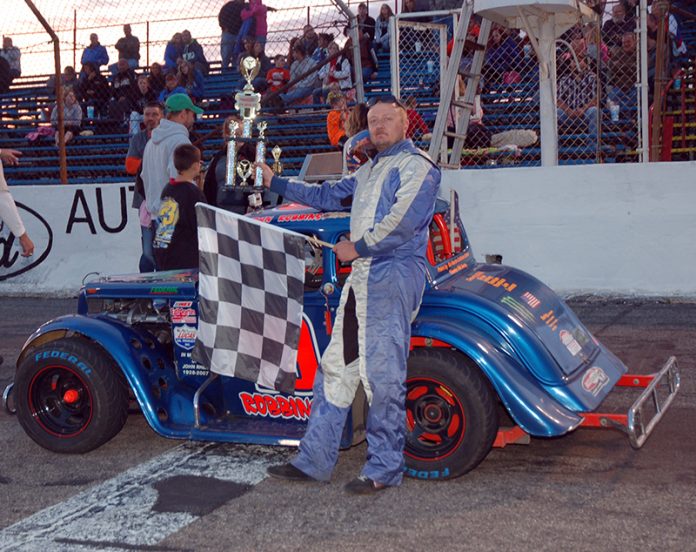 In what has been an unusual start to the 2015 season in Legends competition, defending champion John Robbins finally claimed his first wins of the year.

After starting third in the feature on Pull –a-Part night at Anderson Speedway, Robbins slipped inside of early race leader Ryan Miller on the front straight to take the point.

During two Interstate Auto Auction restarts Robbins first had to hold off Josh Dietz and then Miller to record the feature victory.

The first of the caution flags waved on the second lap when fast qualifier Cody Anderson made contact with the turn two wall while running fourth.

Dietz, the winner of the last Legends feature race, worked his way up to second after starting fourth by the eighth lap.

A lap later the final caution flag waved when Jacob Carroll’s car made contact with the outside retaining wall.

Ryan Miller lost the second spot on lap 24 when he spun on the back straight and came to a stop on the infield grass.

Robbins claimed his first win of the season in the opening heat race when he passed Ryan Miller on lap four with an inside pass on the back straight.

He won by two-tenths of a second over Miller with Zack Miller, Cody Anderson and Dietz rounding out the top five.

Eric Black led the entire distance to win the second heat race with Sturgill slipping inside of Mark Dietzen on the third lap entering turn three.

Dietzen’s night came to an end on the final lap when he appeared to break a right front suspension part and hit the turn two wall.

Dietzen’s was the first of three Legend’s drivers that suffered the same fate in turn two.

At the finish it was Black followed by Sturgill, Doug Dugger, Mike Carroll and Jacob Carroll.