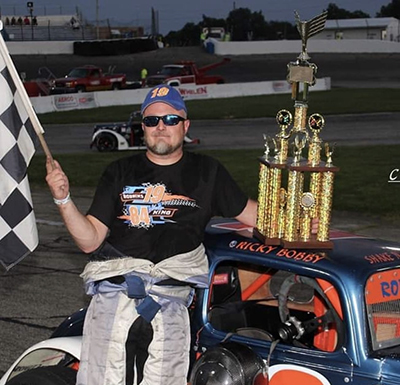 Two drivers got to cross off an item on the personal “bucket list” at Anderson Speedway. John Robbins captured the Grant Fritz/Greg Dietzen Memorial for Legends competitors and Brandon Varney scored his first victory in the Champion Racing Association’s Sportsman Late Model Division on Saturday.

Varney used the high groove to pass leader Dan Leeck with just nine laps remaining after starting ninth in the 17-car field. Leeck led from lap ten through lap 65 after passing early leader Austin Coe on a restart with an outside power move entering turn one. The final 50 laps of the 75-lap feature were contested caution free with Varney having moved into the second spot on lap 25 when Coe and Tanner Jack made contact on the front straight. From there Varney ran in Leeck’s tire tracks until with 12 laps remaining started to look for an opportunity to pass on the high side.

Several of the top contenders were eliminated on lap ten when Ronnie Rose appeared to suffer a suspension problem and when he slowed it collected the cars of Billy Hutson, Jeff Marcum and Tanner Jack. Leeck said toward the end of the race his car was getting loose coming off the corners.

After starting from the pole position in the past and posting seven top three finishes, John Robbins finally captured the Grant Fritz/Greg Dietzen Memorial. Robbins led all 50 laps in a race slowed only once by the caution flag. He was chased early in the race by fast qualifier Chase Smith and with 14 laps remaining Robbins teammate Xavier King came up to challenge the two front runners. King moved into the second spot on lap 36 but Smith retook the position with two laps remaining.

In other racing action: Matthew Adams became the fourth different feature winner in Hart’s Auto Center Crown Vics action. Adams took the lead from William Carkuff following a restart on lap 16 with an outside move on the front straight. Fast qualifier Shane Isgrigg recovered from an early race incident to come home in third. Chad Cory led all 20 laps to collect his second feature win of the season in the Thunder Roadster Division. He beat Jason Powers to the checkered flag by three-tenths of a second with Doug Dugger coming home third.