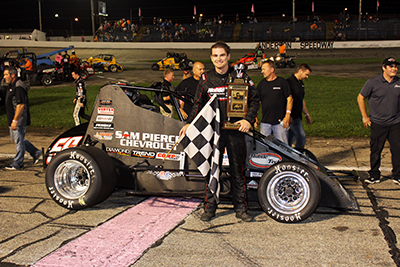 Four years ago Roahrig suffered severe leg injuries while practicing at Anderson Speedway in a super late model. It kept him from racing for much of 2014.

Roahrig took the lead on lap 77 of the Tony Elliott Classic for non-wing sprint cars by holding off Caleb Armstrong over two restarts, the final one coming with just six laps remaining.

For more than half of the 125 lap feature the race was dominated by Kody Swanson, looking for his fourth win on the high banked quarter-mile oval in 2018, including the 70th running of the Pay Less Little 500.

Swanson set fast time during qualifying and because of the inversion started eighth in the 22-car starting field.

Hampton took the lead on the lap 14 restart with an outside move around Fuller entering turn three.

On lap 32 Swanson, who was using the high groove with success, passed Hampton on the back straight.

From there Swanson pulled away to a comfortable lead but disaster struck on lap 76. While attempting to pass the fifth place car of McCune, the two made contact with Swanson coming to rest against the turn two wall. It ended his night.

Roahrig took over the point chased by Armstrong, Hampton, McCune and Bobby Santos III. Santos passed McCune with an outside pass exiting the second corner and was running third with 25 laps remaining.

Roahrig went on to win by .25-seconds over Armstrong followed by Jerry Coons Jr., Eric Gordon and McCune.

In the final appearance of 2018 Kameron Gladish recorded his first ever win at Anderson Speedway in K&M Tool & Die Mel Kenyon Midget action.

Tommy Kouns led the first 22 laps with Gladish keeping up the pressure while looking for a way to grab the point.

Finally on lap 22 Gladish was get able to get inside of Kouns coming off the corner.

From there Gladish drove to a 1-second win over Kouns, Dameron Taylor, Ryan Huggler and Trey Osborne.

Indianapolis driver Donald VanVelkenberg recorded his first feature win at the track in Marcum Welding Front Wheel Drive action, but it took a last lap pass to preserve the victory.

VanVelkenberg took the lead from Tylar Brown on a lap 15 restart and pulled away while there was a heated four car battle for the second spot.

The driver on the move over the final ten laps was Nathan Arthur who used the high groove to move from fifth to second.

Arthur took the lead on lap 49 with an outside pass on the front straight with VanVelkenberg hanging right with him through the first and second corners.

When Arthur slipped in turn four it allowed VanVelkenberg to claim the victory with Andrew Brown coming home in third.