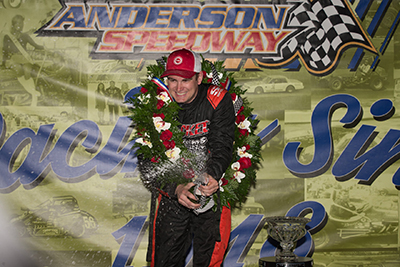 In his sixth Pay Less Little 500 career start, Tyler Roahrig dominated the second half to claim his first title. Roahrig started in the middle of the front row and took the lead for the first time on Lap 241 from Caleb Armstrong. He ran in the top three as the crew turned in lighting fast pit stops. He remained on the point until the leaders made their final pit stops on Lap 387, surrendering the point to Scott Hampton. Five laps later, Roahrig charged to the front and pulled away from three-time Little 500 champion Kody Swanson and Tanner Swanson.

Much of Roahrig’s comfortable lead was wiped out when Travis Welpott spun on the front straight with 30 laps remaining. That allowed Kody and Tanner Swanson to restart right on the tail tank of Roahrig’s car for a run to the checkers, with the Plymouth driver winning by more than four seconds. Roahrig got an excellent restart and was never challenged by Kody Swanson. Kody Swanson said his Doran Enterprises entry dropped a cylinder around lap 160 and was pleased with the finish. Hampton, the last car on the lead lap, finished fourth followed by Caleb Armstrong.

Brady Bacon captured rookie of the race honors, finishing 10th after starting 20th in the field. There were 13 cautions and 14 cars running at the finish. Defending race winner Bobby Santos III was eliminated on lap 274 when he tangled with two other cars in Turn 1.