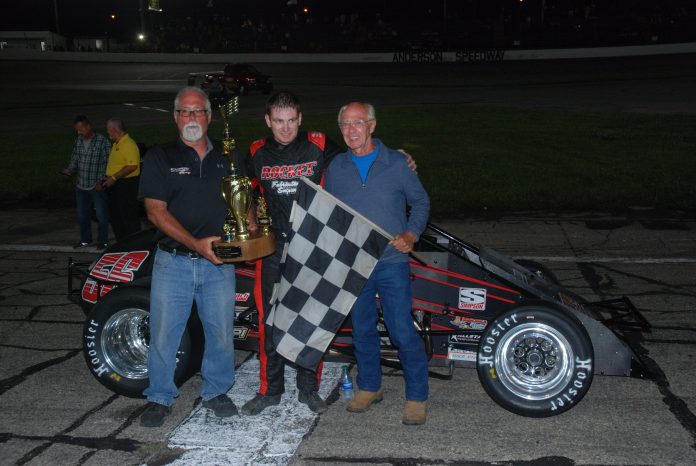 ANDERSON, IN – Tyler Roahrig ran the table leading all 125 laps to capture the 21st running of the Glen Niebel Classic at Anderson Speedway.

It was Roahrig’s third consecutive non-wing sprint car win at Anderson on Saturday bringing sponsor CB Fabricating the victory in the race they sponsored.

Right after the field took the green flag pole sitter Jerry Coons Jr. and Kody Swanson tangled on the front straight bringing out the caution flag when it appeared Coons blew a tire on the start.

Both Coons and Swanson suffered damage with Coons restarting on the tail and Swanson using four laps in the pits.

That put Roahrig and Billy Weason on the front row but on the second lap Wease spun in turn two ending his night with Roahrig on the point.

Roahrig was chased through the first half of the race by Dakoda Armstrong, Caleb Armstrong, Bobby Santos and Eric Gordon, but no one was able to match the leader’s pace.

The race was red-flagged on lap 69 when Scotty Hampton appeared to lose an engine in turn two.

Following the restart Roahrig continued to pull away with Kyle O’Gara making a late race charge to finish second, 7.9-seconds back.

Chris Lamb survived an excursion into the grass and recovered to win the Don & Mel Kenyon Classic.

Lamb led the first 53 laps when he tangled with a slower car and was forced to drive through the infield grass costing him the lead to fast qualifier Jessica Bean.

The race was red-flagged on lap 60 when Sam Mazzo and Colin Grissom got together in turn four and Trey Osborne back contact with the outside retaining wall.

On the restart Lamb was able to make an outside pass of Bean on the front straight pulling away to win by 2-seconds.

In other racing: In the best race of the night Ronnie Rose held off Jeff Marcum and Tanner Jack for most of the McGunegill Engine Performance Late Model feature.

Marcum was glued to the rear bumper of Rose’s ride, but was unable to make the pass for the lead.

Jack recovered from a spin on the tenth circuit to climb back through the field to finish third.

Doug Dugger claimed his second Thunder Roadsters victory of the year with Chad Cory and Clayton Gaines rounding out the top three.