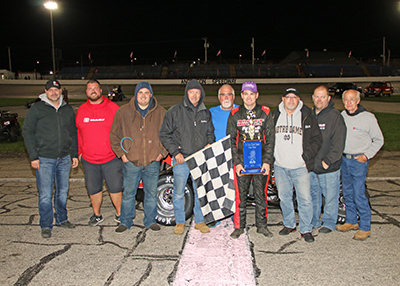 Plymouth’s Tyler Roahrig worked his way through the field to capture the sixth running of the Tony Elliott Classic at Anderson Speedway. It was Roahrig’s third victory in the Elliott Classic on Paint the Night Pink night sponsored by The Herald Bulletin, Sherwin Williams and CB Fabricating .

Roahrig turned a lap Saturday during qualifications at 10.9 seconds, threatening the 10-year old record for sprint cars. With the inversion, he started eighth which put Kyle O’Gara and Caleb Armstrong on the front row. O’Gara grabbed the lead at the start, pursued by Armstrong and Bobby Santos III.

The first caution flag waved on Lap 21 when Tony Main spun in Turn 2, with Roahrig advancing to the fifth spot in the running order. With Armstrong, Santos, Jerry Coons Jr. and Roahrig battling for the second spot, it allowed O’Gara to pull away from the field. But on Lap 63, both Santos and Roahrig got around Armstrong and rapidly closed on O’Gara, who had used up the right rear tire. Santos spun on Lap 80 while trying to pass O’Gara in the third corner and was relegated to the rear of the field. Roahrig took the point on Lap 88 with an outside pass of O’Gara on the back straight. Santos spun again on Lap 98 but mounted a charge over the final 23 laps to finish third behind Roahrig and O’Gara.

Dameron Taylor led all 30 laps to capture the Mel Kenyon Midget feature, having to hold off two championship contenders the entire distance. Taylor grabbed the lead at the start with Ayrton Houk and Colin Grissom glued to his tail tank. Lap after lap, Houk attempted to make an inside pass entering Turn 1, but Taylor was able to keep up the momentum coming off the second corner. Grissom claimed the second spot on Lap 28 with an inside pass exiting the second corner when Houk drifted high. Taylor went on to win by .175 of a second over Grissom with Houk coming home in third. “I knew he (Houk) had a fast car,” Taylor said. “Every time I saw him on the inside, I would just give it a little gas to break his momentum. ”Just by starting the feature event, Houk won the championship with Grissom following up his 2020 championship with a runner-up finish and Jack Macenko finishing third in the point standings.

For the second time this year Camby driver Kyle O’Gara captured the Pavement Midget feature. O’Gara set fast time and with a full inversion of the field that put Nick Hamilton on the pole position. Hamilton jumped into the lead at the start of the 75-lap feature chased by Annie Breidinger and Dalton Armstrong. The only caution flag waved on lap eight when Roahrig spun in turn two. On the restart Armstrong got underneath Hamilton in turn three and a lap later O’Gara moved into the second position with a pass of Hamilton on the front straight. Armstrong’s night ended on lap 21 when he pulled into the inside pit area giving the lead to O’Gara who pulled away to a 7.6 seconds over Aaron Pierce and Hamilton.