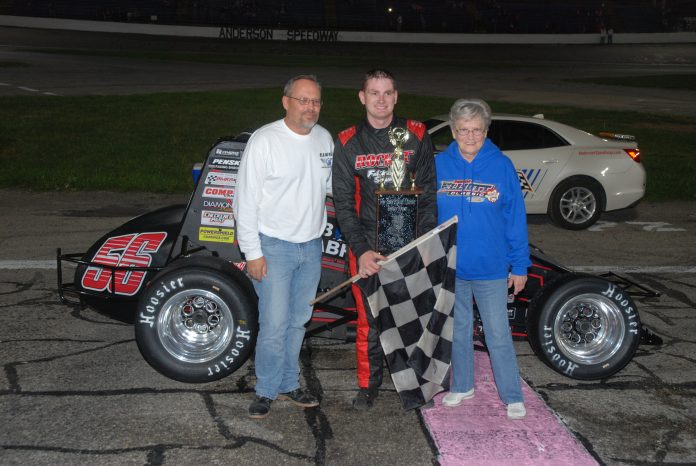 ANDERSON – For the second consecutive year misfortune for Kody Swanson spelled victory for Tyler Roahrig in the Tony Elliott Classic.

A year ago Swanson was comfortably leading the classic for non-wing sprint cars at Anderson Speedway when he made contact with a slower car on lap 72 and his night ended against the turn two wall.

During Saturday’s “Paint the Night Pink” night sponsored by Carter Express it was almost a repeat of the 2018 race.

Roahrig set fast time during qualifications and led the first lap, but Swanson used the outside racing line on the second circuit to claim the lead coming off the fourth corner.

From there Swanson pulled away from Roahrig with Nick Hamilton, Caleb Armstrong, Chris Neuenschwander and Shane Hollingsworth battling for the third spot.

On lap 66 Swanson’s car made contact with a slower car entering turn three, jumped the rear tire of the other car and ended up against the turn four wall.

That put Roahrig on the point chased by Neuenschwander and Hamilton.

The “Rocket” from Plymouth drove away from the competition when the second caution flag waved on lap 105 for a Hollingsworth spin on the front straight.

The driver on the move was Bobby Santos III who passed Armstrong on lap 109 and Hamilton on lap 115 to be running third after starting 11th in the field.

A green-white-checker finish was created when Hamilton and Kyle O’Gara tangled in turn four.

Santos passed Neuenschwander for the second spot with an inside move entering turn one but finished .522-seconds behind Roahrig.

Neuenschwander held on to finish third ahead of Armstrong and Hollingsworth.

Taylor was pressed for most of the race by championship contender Tommy Kouns, but went on to win by .629-seconds.

Gladish was crowned the 2019 champion with Grissom finishing second in the final point standings and Kouns rounding out the top three.