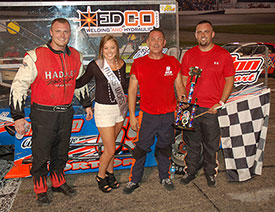 Indianapolis driver R. J. Norton Jr. is no stranger when it comes to winning Outlaw Figure-8 racing at Anderson Speedway.Norton led all 50 laps on July 4 before a packed grandstand to win at the local track for the 12th time since 1989.It seemed like every time Norton opened a comfortable lead there was a caution flag that bunched up the pack.While Norton was running out front Ben Tunney and Michael Hadley Jr. we’re waging a battle for the second spot, swapping the position several times in the middle stages of the 50-lap feature event.The final 18 laps of the race went green with Norton not able to shake off Hadley, Ben Tunney and his son R.J. Norton III.At the checkers it was Norton followed by Hadley, Tunney, Norton III and Doug Grieg.Jeff Shackleford, who won the last two Outlaw Figure-8 races at Anderson Speedway moved from the eighth starting spot up to fourth after 11 laps, but faded over the final 15 laps, finishing seventh.The first yellow flag waved on lap ten when Danny Stanley Jr. tried to thread the needle in the cross-over and was collected by the third place running car of Jesse Tunney. Stanley’s night was over while Tunney had to drop to the back of the field.Tunney’s misfortunes continued on lap 33 when he broke a front tie-rod and bounced off the turn two wall, ending his night.The Front Wheel Drive Figuure-8 drivers turned in an exciting race with four drivers battling for the top spot, several times making it three-wide entering the corners.Randy Owens grabbed the initial lead chased by Kamden Creek, Kevin Henson and Nick Warner. Things got interesting on lap five when Henson, Warner and Creek all taking a shot at the leader.Warner got the jump on a restart on lap eight that saw Owens tangle with Henson in turn three, losing a tire in the process.Following the restart Warner was able to drive away to his fifth feature win of the season followed by Henson, Creek, Brian McKinney and Josh Poore.Josh Tharp making his first start in the Front Wheel Drive Oval Division makes it a successful night winning a heat race and the feature event.Tharp grabbed the point on the opening lap but had to hold off Jeff Williams who moved into second spot early in the race. The two front-runners ran nose to tail for most of the second half of the race with Tharp winning by less than a half-second over Williams. Dylan Hoppes came home in third.The final two spots in the top five changed on the final lap when Randy Hoppes and Jared Keller tangled in turn one which allowed Marshall Clark Jr. and David Powell to claim the spots.On Saturday, July 5, racing action continues at Anderson Speedway with CRA Late Model Sportsman, NASH FM ThunderCars, Front Wheel Drives Oval and Super Karts. Spectator gates open at 5 p.m. with the racing beginning at 8. Admission is $12 for adults and $4 for kids ages 6-12. Children five and under get in free.