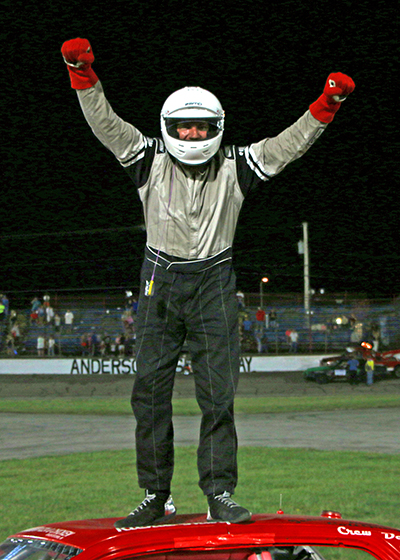 There was little doubt a member of the Tharp family was going to claim the Pay Less Super Markets National Crown, but it turned out to be an unexpected member of the family. For the first time in the 73-year history of the National Crown the Vintage Wrench Ford Division contested the 50-lap race on the Figure-8 course.

Rickie Tharp II established a new track record during qualifying Saturday and started from the pole position. Tharp II would jump into the lead chased by Randy Owen and Frank Hardcastle. Owen’s strong run ended on lap 24 when he pulled into the infield bringing out the second caution flag of the night. On the restart Tharp II was now being challenged by his father, Rickie Tharp, with Matt Tharp running in the third spot. The final caution set up a 10-lap shootout to the finish with the two Tharp’s leading the way chased by Hardcastle, Ricky Craig and Michael Phipps. With seven circuits remaining Tharp II car slowed, spewing smoke from the back of the car which allowed Tharp senior to take the point. The younger Tharp was black-flagged and would finish tenth. Rickie Tharp went on to win by 2.6-seconds over Craig and Phipps rounding out the top three.

Dalton Conner making his first start in a Modified captured the 50-lap feature. Conner set fast time during qualifying and started on the outside of the second row following the inversion. Colby Lane took the lead at the start with Conner quickly moving into the second spot chased by Adam Lee and Jeff Lane. Jeff Lane moved into the third position on the second lap with a pass of Lee on the back straight and the top three drivers ran in a tight pack. Jeff Lane spun coming off the second corner on lap 23 and lost valuable track position to the leaders, he would retire on lap 35. After running in Colby Lane’s tire tracks and looking to make an inside pass, Conner was able to take the point on lap 34 along the front straight. From there Conner pulled away to win by 2.4-seconds over Colby Lane with veteran Joe Beaver coming home in third.

Cameron Mason made it two consecutive wins at Anderson in Midwest Champ Karts action with Randy Nesbitt and Cole Rhoton rounding out the top three.