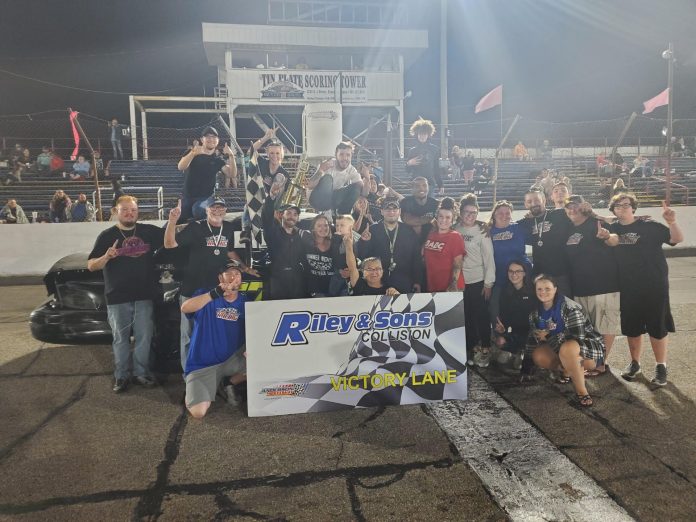 Hoppes of Markleville, Indiana driver finished 2nd in the oval, 7th in the reverse oval and 4th in the figure 8.

McKinney took the lead in the Figure-8 race on lap five from Dakota Brough.

Brough had taken the lead from Matt Benzenbower on the second circuit when the leader drifted high in turn one.

Brough ran in the second spot until he spun on lap 11, an incident that didn’t cause the yellow flag to wave.

Elliott was then chased by Kentucky drivers John Lister and Kyle LaFever when the caution flag waved on lap 25 for a car stopped in the crossover.

McKinney was able to hold off Lister on the restart and went on to win by .9-seconds with Lafever rounding out the top three.

Floyd Knob’s driver Jamie Harbin took the lead from Austin McIntyre on lap eight of the first oval feature. The driver on the move was Randy Hoppes who passed two cars on lap 11 to move into the third spot and then claimed the second spot on lap 23.

The race was red flagged twice.

Lister elected to take the outside line on the restart which allowed Brough to take the lead from Lister on lap 15.

Brough was able to pull away for the victory with Lister and LaFever rounding out the top three.

That caution was caused when front runners A.J. Stewart and Randy Owen tangled on the front straight while batting for the lead.

It was Tony Stewart’s first career win at Anderson Speedway.