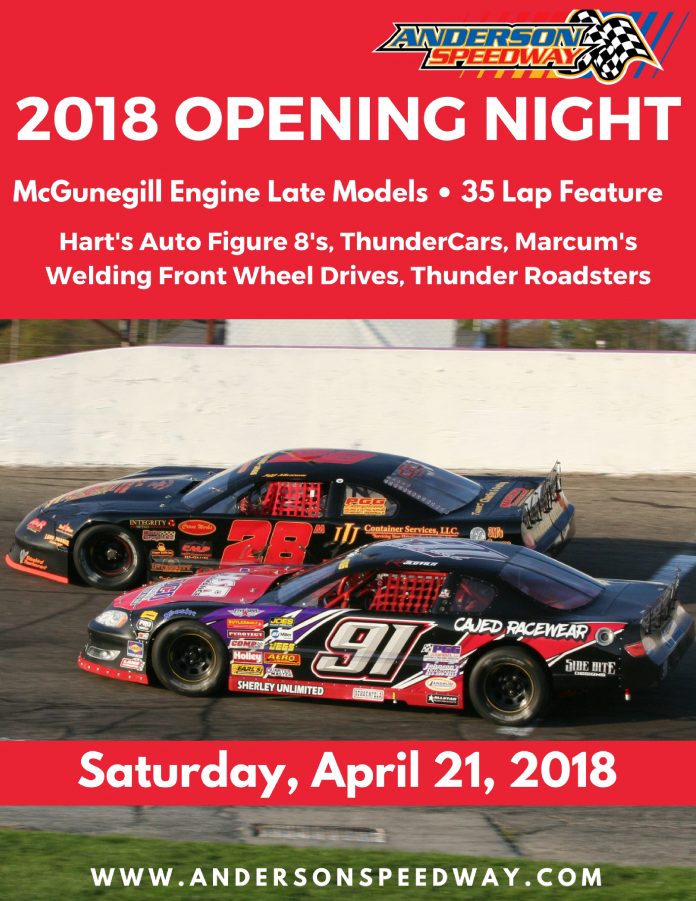 With finally a break in the unpredictable Indiana weather Anderson Speedway will be kicking off the 71st season with racing action in five divisions.
Topping the racing card is the McGunegill Engine Performance Late Models with Jeff Marcum looking to secure a third consecutive championship on the high-banked quarter mile oval. Last year Marcum scored five feature wins on the way to the title.
Shawn Cullen will be looking to defend his Hart’s Auto Figure 8 championship coming off an impressive season where he recorded seven feature wins including the prestigious Edgewater Woods National Crown.
A new champion is expected to be crowned in the Thunder Car Division with Jeremy Threet not expected to compete full-time turning over the ride to his son. Threet won the championship on the last night of racing by holding off Earl Adams.
Last year the division produced plenty of tight racing with five different feature winners, Threet was not among the feature wins in 2017.
The Marcum Welding & Steel Front Wheel Drive division will be in action with Ron Phipps expected to defend his title. Last year Phipps won seven feature races but had to hold off a closing Nick Warner, who scored three feature victories
Dave Osborn will be looking to defend his Thunder Roadsters championship, a title he captured in the last point’s paying feature race over John Robbins.
Qualifying is set for 5:30 p.m. with racing action at 7 p.m. Adults tickets are $12, $4 for children between 6 and 12 years of age and under six admitted for free.