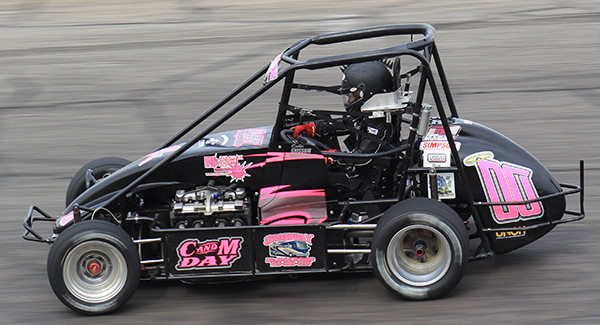 It’s easy to understand why Colin Grissom has racing in his blood.
The 13-year competitor in the Mel Kenyon Midget Series has family roots that have been competing at Anderson Speedway on both sides of his family tree.
His mother’s father Bill Lemon won the National Crown three times in the 1960s and his grandfather Roy Grissom Sr. raced in the Figure 8 division. His dad Tony and uncle Roy Jr. both competed in the Thunder Car division at the local track.
An eighth grader at Pendleton Heights Middle School Grissom started racing quarter midgets at the age of five progressing to junior sprints and mini-sprints before joining the Mel Kenyon Midget Series this year.
Grissom missed the first three races of the season waiting for his 13th birthday to be eligible to compete, but since that time has set fast time once and recorded two podium finishes at Anderson Speedway.
“I wanted to move up to faster cars,” Grissom said of the decision to compete in the Midget Series. “I also wanted to run more asphalt tracks. I like asphalt because it’s faster.”
Prior to joining the Mel Kenyon Midget Series Grissom raced on the dirt ovals at U.S. 24 and the Miami County speedways.
“I’m starting to figure out racing the Midget on dirt,” he said. “It’s totally different racing.”
The team intends to run the entire Kenyon Midget Series schedule in 2018.
He set fast time during qualifications in Anderson on Aug. 5 and then passed two cars on the final lap to finish third.
Grissom is already setting his sights on competing in the Pay Less Little 500 and his primary sponsor Parallax Power Supply hopes to be with him at the Indianapolis 500 in the future.
“I like open wheel,” he said.
His mother, Bobbi Jo Burge said she has adapted to Colin’s being in a race car.
“Another mother told me he’s safer in a race car than riding a bicycle,” she laughs. “He has a helmet, HANS (head and neck restraint) device, driver’s suit, gloves and a five point harness.
“It still makes me nervous,” Burge said. “That’s my kid.”
Before his first race at Anderson on May 26, when he finished seventh, the team tested twice at Anderson Speedway.
“It was fun, fast,” he said.
Burge said open wheel legend Mel Kenyon has been a great mentor to her son.
“He tells me I’m progressing a lot,” Colin said.
While at school Grissom and his industrial arts teacher and wrestling coach, Travis Welpott talk about racing a great deal. Welpott is a veteran of several Little 500 events.
Grissom is also active with Best Buddies where he spends time with a disabled student several times a month, having lunch and helping with school work.
In addition to Parallax Power Supply Grissom receives sponsorship help from Day Transportation and Broadway RV and Boat Storage.
“I want my first win to be at Anderson,” he smiles. “I have thought about it. That would be great.”