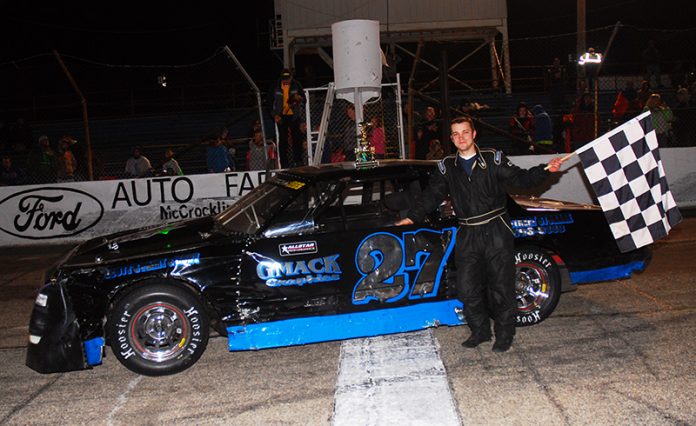 After taking the lead of the CRA Street Stock feature the only worry Josh Poore had was running out of fuel at Anderson Speedway on Saturday.

Poore took the lead on the Ivy Tech restart on lap 23 with an outside pass of Mason Keller and remained on the point for the next 52 laps to record the victory.

The start of the race was slowed by eight caution periods during the first 26 laps as the 22 drivers bumped and banged their way around the high banked quarter-mile oval.

Most of the cautions were a result of single car spins with the only multi-car incident taking place on lap seven involving three cars. Andrew Cook with sponsorship from Rickers had climbed seven spots at the start before being pinched into the outside retaining wall in turn four.

Despite all the cautions at the start Keller and James Kirby III provided the fans that braved a cold night great racing by swapping the lead four times over the span of 18 laps.

Poore started fourth in the 22-car field and was shuffled back to eighth at the start but patiently worked his way back toward the front.

After 20 laps he was running third and passed Kirby on a restart entering turn one and three laps later took over the lead for good.

Keller and Kirby continued to battle for the second spot for the next 19 laps until Keller spun in turn three and collected the car of Jimmy Kirby.

The final caution flag waved on lap 62 when Zach Henderson spun and on the restart Poore was able to maintain the lead over Kirby and Phil Jenkins.

At the finish there were only nine cars running in a race slowed by caution period 12 times.

Dave Osborn made a gutsy three-wide move to take the lead to win his fourth Thunder Roadster feature in the past five races.

Osborn closed out the 2015 season with three wins and finished third in the season opening event.

Osborn took the lead at the start but was passed by defending track champion John Robbins on the seventh circuit. Osborn never lost contact with the leader as they approached slower cars, he made the move for the lead.

Going down the front straightway Osborn split the lapped car and that of Robbins to move to the point entering turn one on lap 16.

From there Osborn pulled away with Robbins finishing second followed by Doug Dugger.

Zack Miller made it two wins in Legends competition taking the lead from Cody Anderson on lap 4 and remaining out front until the finish.

Although Miller pulled away to a comfortable lead Anderson was involved in a spirited battle for second with fast qualifier Adam Sturgill and John Robbins.

Anderson was able to hold off his two rivals to finish second followed by Sturgill.

Phipps took the lead on lap three following a restart, but a lap later Warner was back out front with a power move on the front straight. Jack Taylor came home in third.