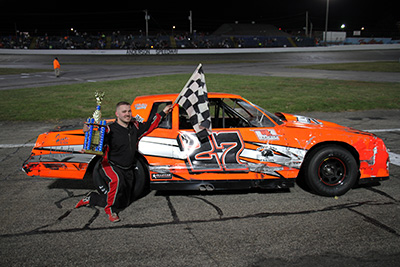 Three drivers all looking for championships at Anderson Speedway won their feature events, but only one claimed the title.

Defending Vore’s Welding & Steel Street Stock champion Josh Poore needed a victory Saturday in the 75-lap feature to secure the championship. Poore entered the night only 10 point behind Jacob McElfresh and started the night by setting fast time during qualifications. From the pole position Poore jumped into the lead and lead all 75 laps. Several times Poore had wide margins erased during one of the four caution periods. McElfresh moved into the second spot on the fourth lap with an inside pass off Jordan Hahn exiting the fourth corner. On three subsequent restarts McElfresh was unable to use the high groove to get around Poore for the lead. Poore went on to win by 1.3 seconds over McElfresh with Hahn, Mark Eads Jr. and John Conner rounding out the top five. The victory marked the only feature win this season for Poore.“We’ve been breaking all year,” the Anderson resident said of his early bad luck in 2020. “The crew worked hard all week getting the car ready. “Jake (McElfresh) is always fast and a good competitor,” Poore said.

Ronnie Rose set fast time and led all 50 laps in his effort to become the ThunderCar champion, but final results shows Ron Phipps as the champion. Rose took the lead from the start  and throughout the first 30 laps was chased by Alan Lambert and Josh Garr. While batting for second on lap 33 Garr spun in turn three and along with Lambert was relegated to the tail of the field. That put Dustin Sapp into the second spot but before another lap was completed he came to stop against the outside retaining wall in turn three. Earl Adams Jr. moved into the second spot on lap 35 with a pass of Buck Purtee with an outside pass on the back straight. Rose survived one more restart to win by 15-seconds over Adams followed by Purtee, Robbie Wyman and Frankie Oakes. Phipps was running in the top three when his car experienced a mechanical problem on lap 37 and finished 12th.

Shane Reed gained three position in the space of four laps with less than 20 laps remaining to win for the second time this year in the Marcum’s Welding Front Wheel Drive division. Reed passed Travis Lee on lap 35 with an inside move coming off the fourth corner. Reed went on to win by 3.6-seconds over Lee and on the strength of a third place finish Ronnie Constant was crowned the champion.

Kaylee Atkinson took the lead on lap 15 of the Hart’s Auto Crown Vic feature race and then held off Shane Isgrigg and Matthew Adams for the victory.