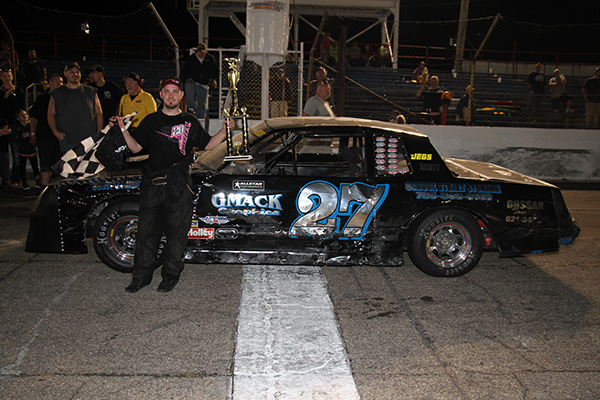 It turned out to be a magical night for Anderson’s Josh Poore on Herald Bulletin night at Anderson Speedway turning it from one of frustration to victory celebration.

Poore’s team worked on the car after it arrived at the track for the Champion Racing Association’s Street Stock feature and missed qualifying.

With only a couple of practice laps, Poore started on the tail of the field and worked his way to the front taking the lead on lap 49 and holding off two challengers on Ivy Tewch restarts to record the victory.

Poore took the lead from Indianapolis driver Andrew Teepe with an outside pass on the front straight following a restart.

Fast qualifier Mason Keller moved into the second spot on lap 60 with an inside pass of Teepe coming off the second corner and set his sights on Poore.

The final restart came with just three las remaining with Poore maintaining the advantage when Keller spun his rear tires and lost momentum.

Poore went on to win by three-tenths of a second over Keller followed by Teepe, Andrew Cook and Brandon Mefford.

Poore said he was a little worried about the final restart with Keller lining up on the outside.

Greenfield’s Phil Jenkins, the CRA point leader, took the lead from the start and was passed by Anderson’s Andrew Cook in the Likens Farms/Rickers Chevrolet took the lead on a restart on lap 8.

Behind Cook there was a spirited battle for position involving Keller, Jimmy Kirby III, Jenkins and Brandon Mefford.

Keller moved into the second spot on lap 18 and ran down Cook, the two tangled on lap 30 while battling for the lead and were relegated to the tail.

Teepe assumed the lead and stayed out front until he was passed by Poore.

In CRA Sportsman Late Model action Fort Wayne’s Tommy Cook was elated with his first ever win at Anderson Speedway.

Cook led the first 60 laps before he was passed by Eddie VanMeter, looking for his fourth win of the year at Anderson Speedway.

Cook was passed for the second spot by fast qualifier Jeff Marcum on lap 61 and the battle for the lead was on in full force.

On lap 64 Marcum got inside of VanMeter coming off the fourth corner and the two drivers tangled bringing out the caution flag.

That put Cook back on the point and he held off Danny Trent to win by four-tenths of a second with Steven Woods, Tony Brutti and Marcum rounding out the top five.

Frankton’s John Robbins led all 25 laps to record his third consecutive Thunder Roadster win and fifth of the season.

Robbins was chased for most of the race by Dave Osborn and Doug Dugger, who had an intense battle for the second spot.

At the checkers it was Robbins winning by a second with Osborn, Dugger, Marty Griffin and Rodney Oliver rounding out the top five.