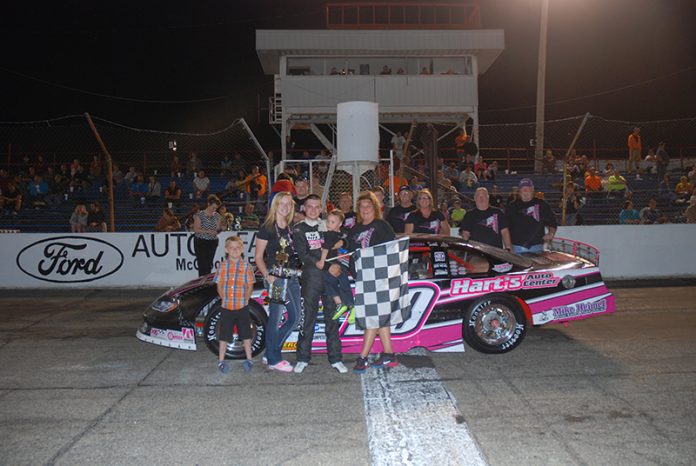 Dossey, the defending track champion, set a new track record during qualifications and then led all 40 laps to record his third victory in a row.

After rain postponed the spring championships, the double point events for the McGunegill Engine Performance Late Models took place on Saturday with Dossey turning in a dominating performance.

It proved to be a good night for Josh Dossey III, the point leader entering the race. Dossey set a new track record during qualifying at 12.839-seconds besting the mark of 12.858-seconds set in May, 2014 by Billy Van Meter.

Starting on the pole position, Dossey opened a sizeable lead over the field, only to see it erased when the first caution flag waved when second place running Jeff Marcum spun in turn three after contact with the car of Jason Neal.

It would take four attempts to complete another circuit with spins by Bret Miles and Joe Woodring brought out two of the caution periods.

The final caution flag waved when Neal, running third at the time, made contact with the second place car of Ronnie Rose.

Once the action resumed Dossey pulled away for his third consecutive win followed by Miles, Woodring, Rob Allman and Kent Baledge.

Dossey said last year he won the Spring Championship race on his way to the track title and hopes the same pattern will be repeated.

“I don’t want to jinx myself, but it looks like we’re moving toward another championship,” he said in the AutoFarm McCrocklin Ford Winner’s Circle.