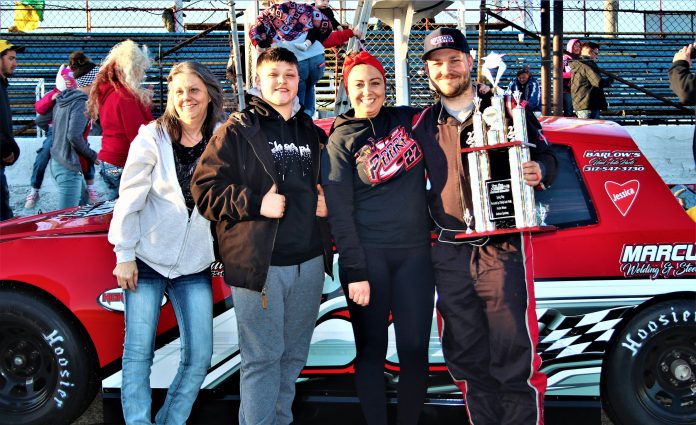 On April 17th, 2022 Josh Poore inched himself closer to the all time Street Stock wins record at Anderson Speedway. After leading all 75 laps in the Van Hoy Oil CRA Street Stocks portion of the Spring Fling Presented O’Reilly Auto Parts, he went to victory lane for the 49th time in a Street Stock on Anderson’s famed pavement oval. Poore now sits two wins behind the driver who holds the record for most street stock victories at Anderson Speedway, Rick Fields. Now only three wins away from clinching the record, Poore returns to Anderson Speedway on Saturday, June 25th in the same car he took to victory back in April.

“I really enjoy racing at Anderson Speedway because my family and friends can come out and see me race,” said Poore. “I try to block out the record and just focus on the next race. It will come when it comes, if it ever comes.”

A native of Anderson, Indiana, Poore started racing at Anderson Speedway at the age of 14. He entered the ThunderCar division and went on to win the championship and rookie of the year honors in his first year of racing. In 2005 Poore began racing in the Super Truck Division. He competed with the super trucks until 2008 when they became obsolete at Anderson Speedway. Poore’s best points finish was second. In 2009 he entered the ThunderCar Figure 8 division. He won rookie of the year honors in the Figure 8 division. 2010 was the first year Poore started on his ascent in the street stock division.

Poore has raced street stocks for over 10 years. Over that time span he has accumulated 49 victories and has won five street stock track championships (2011, 2015, 2017, 2019, and 2020). His five track championships is the record for most Street Stock Championships at Anderson Speedway. In 2017, Poore would also set the Street Stock track record with a time of 13.664 seconds. In 2012, he also competed in the Anderson Speedway Premiere Late Model division. In what would be his only full year of competing in late models, he went on to win the season championship. Poore joins an accomplished field of racers for the Tom Wood Honda 150 presented by Sherwin-Williams.

“Our goal is to be there at the end (of the race),” explained Poore. “ We are going to need some luck but we have to keep ourselves in contention to be around at the end.”

On Saturday pit gates open at 2:30pm. Practice will begin at 4pm with qualifying beginning at 5:45pm. The race program is set to begin at 7:30pm and will include the Tom Wood Honda 150 Presented by Sherwin-Williams Cowboy, Come Canning & Distillery Four Crown event for the Van Hoy Oil CRA Street Stocks. Also racing that night will be the Anderson Speedway ThunderCars and Crown Vics along with the Thunder Roadsters.