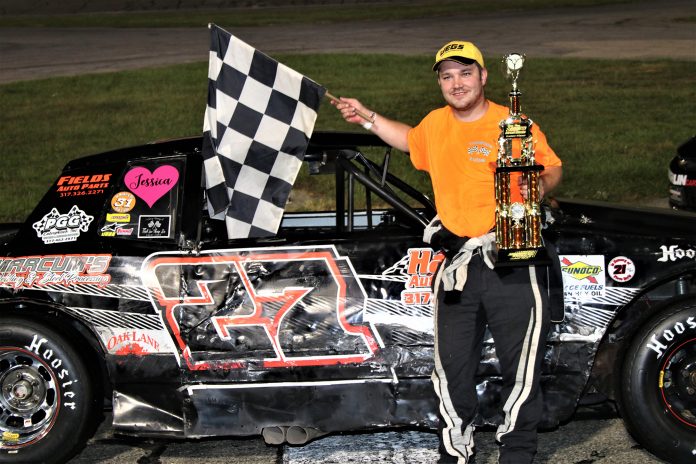 The 30-year-old racer from Anderson, Indiana started racing at a young age. “I started racing go karts at age 8,” said Josh Poore. “I raced at Lapel Speed Creek until I was 11 years old. I won in every Kart division I entered in.” When Poore was growing up, he was also able to watch some of the best drivers compete at Anderson Speedway.

The driver that holds the record for most street stock victories is Rick Fields. Fields is the son of longtime late model driver Bob Fields. Fields’s 51 wins seemed like an insurmountable feat that many thought would never be broken. Rich Boyer climbed up the winners list in the early 2000’s but retired with 37 victories.

Poore started racing at Anderson Speedway at the age of 14. He entered the ThunderCar division and went on to win the championship and rookie of the year honors in just his first year of racing. In 2005 Josh began racing in the Super Truck Division. He competed with the super trucks until 2008 when they became obsolete at Anderson Speedway. Poore’s best points finish was second. In 2009 he entered the ThunderCar Figure 8 division. He won rookie of the year honors in the Figure 8 division. 2010 was the first year Poore started on his ascent in the street stock division.

“I have competed in almost every type of car to ever race at Anderson Speedway,” explained Josh Poore. “I have raced everything from super late models to legends and even mini cups. I think all of the laps that I have turned at Anderson Speedway is what gives me such an advantage. Every Night that I come to race; I am there to win. I do not race for second.”

Poore hasn’t been as active racing in recent years as he has started racing with his two sons Eli and Raylan. They have started their racing careers just like Josh, at the local kart track. They race at the kart track located at the state fairgrounds. You will see Josh Poore back in a street stock in 2020 competing for street stock wins.

“I really want to get to the 52nd win,” said Josh Poore. “Once I get that 52nd win I would really like to get a chance to race in the Little 500. I think a local driver like me that has a lot of laps at Anderson Speedway would be very successful in the race.”