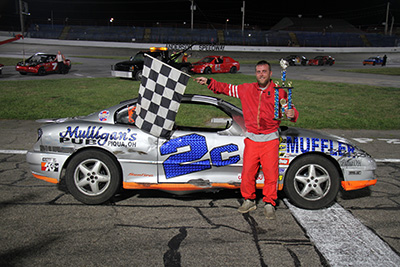 Visiting Ohio driver Corey Plunkett made his first trip to Anderson Speedway a memorable one. Plunkett started fifth in the feature line-up for the Marcum’s Welding Front Wheel Drive 50-lap feature and by the fifth circuit was running third.

Shane Reed took the early lead chased by Nick Warner and Tylar Brown. Following a caution period Plunkett used the high groove to get around Warner on the front straight with fast qualifier Michael McKinnon also getting past Warner. On a restart on lap 15 Plunkett again used the outside line to pass leader Reed to take the point, a lead he wouldn’t relinquish. McKinnon spun on lap 23 while running third and retired from competition.

The running order was shaken up when third place running Reed made contact with the front straight retaining wall and collected the car of Tim Page, running fourth at the time. Plunkett went on to win by 1.2-seconds over Brown, Elliott McKinney, Ricky Craig and Shane Cullen. Plunkett said he is known for weaving in and out of traffic and demonstrated that skill on Saturday while racing in the lead.

The final visit of the Michigan based Vintage Racing Organization Association got off to an aborted start with Scott Pepple making contact with the back straight wall and at the same time Terry Bryne dealing with a broken suspension on the opening lap. Once the race started Randy Pierson took the lead with Cody Linn and John Evans in hot pursuit. But the driver on the move was Ryan Boorsma who gained positions on lap three, five and eight to be running second to Pierson. Boorsma took the lead from Pierson on lap 20 with an inside pass entering turn three. Following a restart on lap 21 Pierson lost positions to Linn and Tom Boorsma. Ryan Boorsma claimed his second win of the year at Anderson Speedway by 1.9-seconds over Linn and his father, Tom. Boorsma’s car was showing some white paint on the right side tires after scrapping the front straight wall while battling with Pierson for the lead.

Anderson’s Josh Poore won his fourth Vore’s Welding & Steel Street Stock feature taking the lead from Jacob McElfresh with an inside pass coming off the third corner early in the race. James Kirby III followed Poore to the checkers with McElfresh, Nathan Green and Willie DeHart rounding out the top five.

Chad Cory dominated the Thunder Roadsters action winning for the third time in 2019. He was never challenged for the lead with fast qualifier Doug Dugger coming home in second followed by Gregg Cory, Jason Powers and Phil Jenkins.