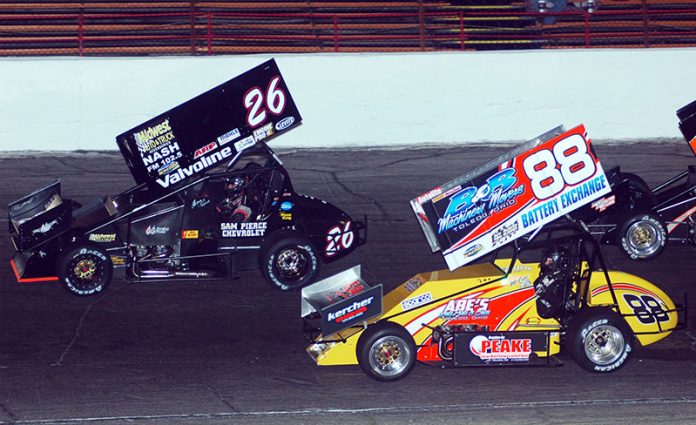 Daleville’s Aaron Pierce used a fast race car and lots of patience late in the race to win the winged spring car feature at Anderson Speedway on Saturday.

It was Pierce’s first win in a winged sprint car at Anderson Speedway since 2010 and third overall. His return to victory lane came in a dominating fashion.

Pierce jumped into the lead at the start leading  all 50 laps on MoFab Night at the Races winning by 1.6-seconds over Davey Hamilton Jr.

This was the last appearance of the Must See Racing Xtreme Sprint Series before the Labor Day weekend 150-lap race, the longest event the winged sprint series will run all season.

Pierce built up a straight away lead over Hamilton and Jimmy McCune by the 30-lap mark, but as he approached lapped traffic Hamilton closed to within several car lengths.

With Tim Cox, the last driver on the lead lap, running right in front of Pierce, the leader opted not to attempt a risky pass.

“It was hard to get around Tim (Cox),” Pierce said in the Tim Thompson Nationwide Insurance Winner’s Circle. “I really couldn’t see anybody challenging me, so I decided to just race hard. I had an awesome car tonight.”

But once Pierce cleared the slower traffic he again pulled away from the field. Hamilton finished second followed by McCune, JoJo Helberg and fast qualifier Brian Gerster.

The race was slowed only one time for a spin on lap nine by Dave Bumgarder in turn three.

Baumgartner gave car owner Mike Blake a win in the first of the two heat races leading the entire distance after starting on the front row. He was able to hold a comfortable lead over Litt with Gerster, Pierce and Decaire waging a battle for the third spot.

Cox captured the second heat race leading the entire distance, but having to hold off a late charge by Cody Gallogly.

Gallogly closed to within three-tenths of a second when the checkered flag waved. McCune finished third just in front of Chris Neuenschwander with Ryan Gillenwater finishing fifth.

During qualifications the top 10 cars were within a half-second of each other with Gerster taking the honors with a lap of 10.43-seconds.