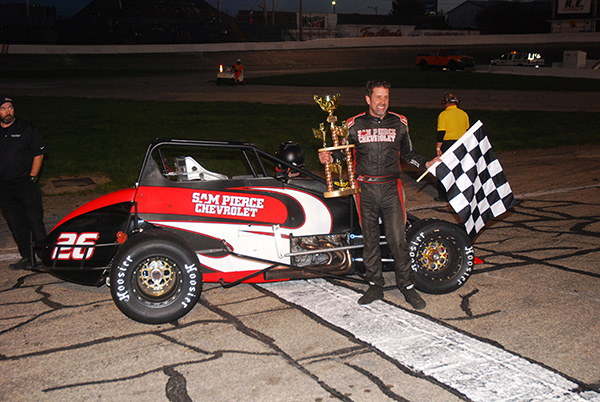 Pierce built a comfortable lead after taking the lead from Chris Neuenschwander on lap 29 and was attempting to pass the third place running car of Brian Gerster.

The two make contact in turn four when Pierce attempted to get inside of Gerster causing both cars to spin, but they continued running.

Neuenschwander was given the point on the restart but Pierce regained the top spot with an outside pass in turn one to win the 17th annual running of the Glen Niebel Classic for the fifth time in six years.

Neuenschwander took the lead at the start of the 100-lap race for non-wing sprints from his starting spot on the outside of the second row chased by Gerster and Jimmy McCune.

Pierce started eighth in the feature and moved around Travis Welpott and McCune to run third after seven circuits.

By lap 20 Pierce was closing on Neuenschwander with McCune running third when the caution flag waved when Mark Hall spun on lap 26.

On the restart Pierce used the outside line to take the lead from Neuenschwander and started to pull away.

Pierce maintained the lead until he tangled with Gerster setting up the final green-white checker finish.

Neuenschwander came home second for the second year in a row followed by Gerster.

Poole started seventh in the 19-car field and although stayed in close contact with the leaders didn’t crack the top five until lap 47.

He took the lead on lap 55 with an outside pass of Mark Timmerman entering turn three after race leader Blake Rowe and Bob Sibila crashed on a restart. It appeared Sibila suffered a broken suspension part and put both cars into the turn two wall.

That incident came on a restart after Rowe and Jonathan Martin tangled in turn four while battling for the lead.

The first caution flag didn’t wave until 28 with Timmerman surrendering the lead to Rowe on the restart. Rowe led until lap 53 with Martin leading a lap and finally Poole.

Fortville driver David Cain hadn’t competed at Anderson Speedway for six years but made the most of his return to action by scoring the Thunder Car feature win.

Cain led all 30 laps but first at to hold off Shawn Evans until lap 22 when the only caution flag waved.

On the restart fast qualifier Jeremy Threet and Brandon Burkhart got around Evans with six laps remaining but were never able to challenge Cain for the lead.

Manny Aguillar took the lead with six laps remaining by passing Kody Kennedy and going on to win the feature for the FastKarts.

Thomas Skiles finishing second after charging back through the field. Skiles spun coming off the second corner on lap 19 while running third. Drake Stancel rounded out the top three.