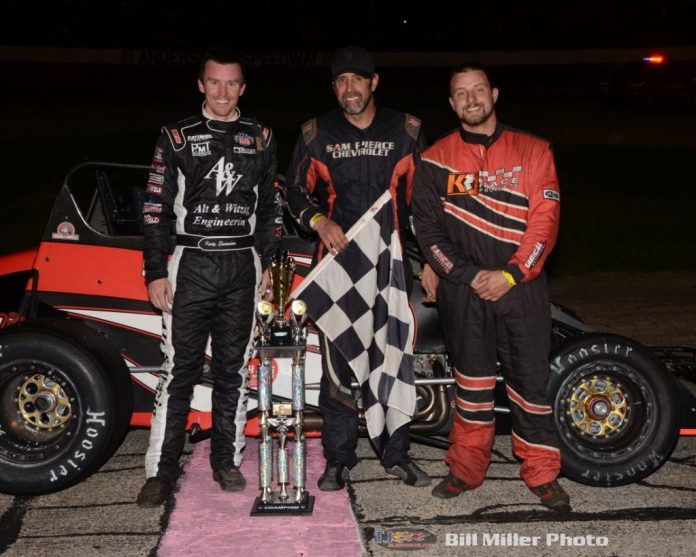 ANDERSON – With 16 laps remaining in the second annual Tony Elliott Classic, Aaron Pierce knew he had to get up on the wheel to hold off a closing Kody Swanson.
Pierce took the lead at Anderson Speedway on Saturday with a pass of early leader Kyle Hamilton following a restart on lap 19 after Brian Gerster spun coming off the second corner.

Swanson was the driver on the move for the first 30 laps advancing from the 20th starting spot to second and was turning laps several tenths of a second quicker than Pierce when the fifth and final caution flag waved for a spin by Travis Welpott on the front straight.
Pierce maintained the lead on the restart as Swanson was dealing with a fuel issue. Chris Neuenschwander came home in third followed by Hamilton and Anthony McCune.
Swanson won the inaugural event in 2017.

Pierce started sixth in the rain delayed event after setting fast time in qualifying. He was running third after 13 laps and moved into the second spot when Bobby Santos III slowed on the track. That set up the pass for the lead.

Pierce is a multiple time winner of the Glen Niebel Classic for non-wing sprint cars at Anderson Speedway.

Swanson said the team made the car light on fuel because they were starting at the back of the pack.

Swanson driving for car owner gene Nolen had climbed into the top ten after 13 laps of the 50 lap feature and just five laps later was running fourth. He slipped inside of Neuenschwander with an inside pass coming off the second corner on lap 26 and a circuit later passed Hamilton for second place.

Entering the night Taylor had already become the first driver to win back-to-back championships and had his sights set on becoming the all-time winningest driver.
Taylor started tenth in the field but quickly moved into the top five and was running second by the fourth lap behind Ryan Huggler when early race leader Collin Grissom got high in the third corner.

He passed Huggler with an inside move on the front straight and never looked back despite two restarts.

It was Taylor’s 16th career feature win which broke the tie with Kyle O’Gara.
The top five positons got scrambled with four laps remaining when the fourth and fifth place running cars of Logan Huggler and Cole Christy tangled in turn two.
Trey Osborne came home in third followed by Tommy Kouns and Jacob Dolinar.

In other racing: Kody Marsee made it two wins in a row in Indy FastKarts action aided by drafting help from teammate Many Aguilar. Cody Kennedy rounded out the top three.