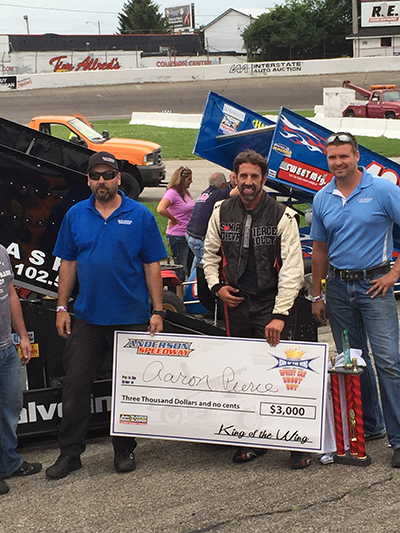 Aaron Pierce made a move that couldn’t be made but used a three wide pass to take the lead and win the King of the Wing Royal Purple 50 feature Sunday at Anderson Speedway.

Pierce was running second to early leader Jason Blonde on lap 25 when the leaders approached a slower car. He drove down into the flat entering turn one, making it three wide, made it stick to take the lead.

The only caution flag waved on lap 48 when Jackson touched wheels on the back straight with Gerster while battling for third. Jackson went into the infield and stopped in turn three.

“The car was pushing all day,” Pierce said in the AutoFarm McCrocklin Ford Winner’s Circle.

“They say you can’t pass on the flat here, but I passed two cars down there,” he said.

Behind Pierce there was tight racing for the second spot between Blonde and Gerster. Several times Gerster attempted to get inside of Blonde, but the attempt was blocked by a lapped car.

Drivers from California, Idaho, Michigan and Indiana were on hand for the first ever visit of the King of Wings national winged sprint series to Anderson Speedway.

Frankton’s John Robbins used the inside line on lap 27 to pass Mark Dietzen to claim his third feature win of the year in the Thunder Roadster Division.

Dietzen grabbed the lead from the pole position and pulled away from the field, but Robbins methodically worked his way from the sixth position.

He passed Doug Dugger on the third lap, Rodney Oliver on lap seven and moved into third with an inside pass of Marty Griffin on the 14th circuit.

Two laps later Robbins got inside of Brad Kendle for the second position and started cutting into Dietzen’s lead.

After taking the lead Robbins was not able to pull away from Dietzen, who finished three-tenths of a second out of first. Griffin, Dugger and Kendle rounded out the top five.