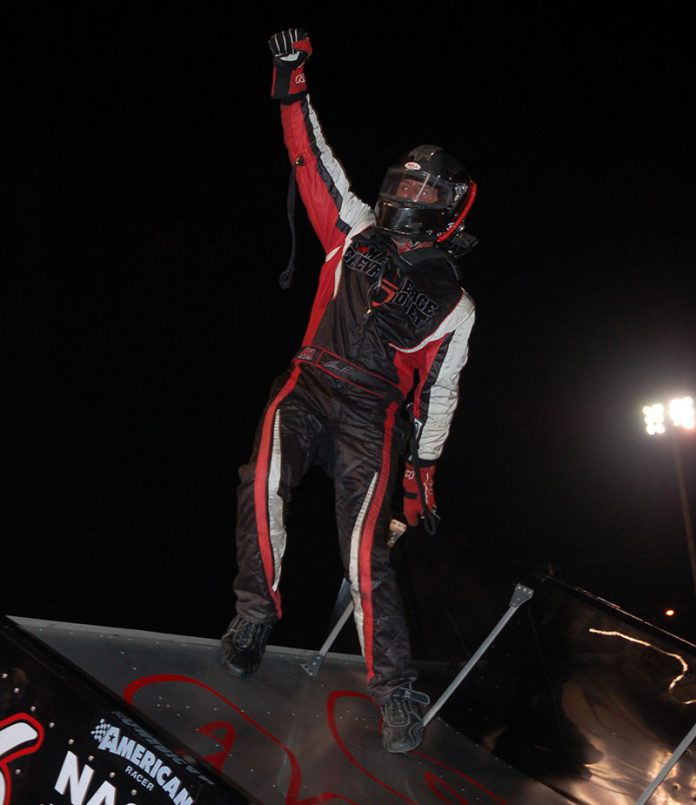 Aaron Pierce turned in a dominating performance to win the longest winged sprint car feature ever at Anderson Speedway on Saturday, August 30.

Pierce took the lead from Ryan Gillenwater on lap 43 of the MoFab Labor Day 200 presented by Hoosier Park Racing & Casino for the Must See Racing winged sprint series.

Starting third Pierce got inside of Jimmy McCune on lap 37 to move into the second spot.

Six laps later he drove underneath Gillenwater entering turn three to take the lead and started pulling away from the rest of the field.

With only 11 teams on hand, there were four cars that were the class of the field, Gillenwater, Pierce, Jimmy McCune and Jacob Wilson.

For the first 46 laps the front-runners ran in a pack nose to tail until Pierce made his move to the front.

Pierce, the winner of the August 16 tune-up race for the series, pulled into the Tim Thompson Nationwide Insurance Winner’s Circle for the third time in his career in a winged sprint at Anderson Speedway.

He credited his crew led by Evan Jackson with hitting on the right set-up for the race.

“I wasn’t concerned about the tires,” Pierce said. “We tested last week and the tires we used to win here a couple of weeks ago were good for 120 to 150 laps. They don’t fall off. The car was really good and at the finish I was trying to save some tire.”

Pierce was followed to the checkers by Jimmy McCune and Chris Neuenschwander, the only other drivers on the lead lap.

McCune said his car broke a right rear suspension about 20 laps into the race and after bouncing off the wall the handling got worse.

“This wasn’t a grueling race,” he said. “The last time we were here the 50 laps were grueling. I liked it.”

Gillenwater brought out the second caution flag on lap 95 when he made contact with the turn two wall while running second.

Two-time Pay Less Little 500 winner Jacob Wilson was forced to retire at the halfway break with an engine problem.

There were only six cars running at the finish.

Gillenwater won the first of the two qualifying races with McCune capturing the second race with a pass of Troy DeCaire on lap 19 entering turn one.