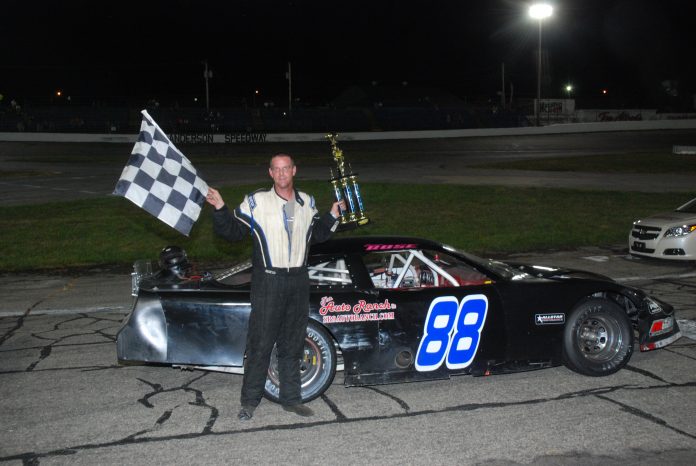 ANDERSON – Local driver Ronnie Rose had not finished a late model race all season, but some of that sting was removed with a victory at Anderson Speedway.

Through a series of mechanical and on track mishaps Rose was having nothing but bad luck in 2019, he led the final 32 laps Saturday to win the Champion Racing Association Sportsman Late Model 100.

There was no change in the running order for the first 48 laps when the second caution flag waved when fast qualifier Billy Hutson make contact with the turn three wall.

That put Rose, who started ninth in the field, in the top five fo the first time.

On the restart Varney moved into the second spot when there was a string of caution flags between lap 63 and 73 including a spin by Varney on the front straight.

Rose moved into the second position on lap 67 with an inside pass of Coe entering turn one and following another caution flag on lap 68 was able to power around the outside of Marcum entering turn one.

Marcum’s night would end on lap 73 when he spun in turn three and was collected by the car of Jaren Crabtree.

For the next 12 laps Coe was applying pressure on Rose for the top spot until he spun on lap 91 setting up a nine-lap run to the finish.

Rose won by .28-seconds over Casston Everidge and Varney.

With the victory Miller has tied Daniel Moyes III with five victories in the biggest race of the year for the division. Moyes won five in a row starting in 2008.

Caleb Heady jumped into the lead at the start of the 50-lap race that was broken into two segments.Tristan Burkaski and Miller were running close behind with Sam Butler and John Robbins in the mix.

Miller led from there to the finish with Heady finishing 1.3-seconds back followed by Butler.

Dustin Sapp won his fifth PGG Enterprise Thunder Cars feature of the year but the outcome remained in doubt until the final corner.

For the final 13 laps Sapp and fast qualifier Frankie Oakes put on a thrilling show as they raced nose to tail with David McConnell waiting for someone to make a mistake.

Over the course of the final two laps Oakes was able to get inside of Sapp and the two did a lot of trading of paint as they battled for the lead around the quarter-mile oval.

Coming off the final corner Oakes slipped allowing Sapp to win by .155-seconds with McConnell, Jeremy Threet and Ron Phipps rounding out the top five.

Stineman inherited the lead on lap 26 when leader Brandon Huff was involved in a three truck incident in turn three.