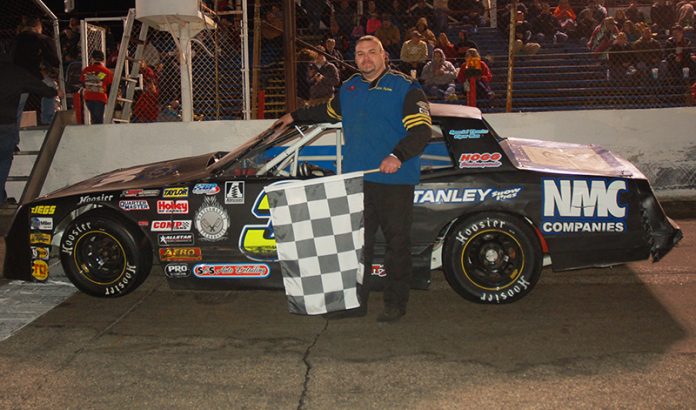 Calvin Parham took advantage of a two-lap dash to the checkers to win the season opening feature race for the Street Stock Division at Anderson Speedway on Saturday.

For 27 laps the battle was between Kirby and Josh Poore as the two front runners were never separated by more than a car length.

With the laps winding down, fast qualifier Calvin Parham was closing on the two leaders when the running order got scrambled by two incidents with three laps remaining.

That set up a green-white checker finish with James Kirby taking the pole position with fast qualifier Calvin Parham on the outside.

Parham used the outside line to take the lead when the International Auto Auction green flag waved on the restart and pulled away to beat Kirby to the checkers by a second followed by Nick Warner, Matt Clark and Jimmy Kirby.

“The car was consistent all night,” Parham said of the NMC Company sponsored Chevrolet. “I was trying to run them down when the caution came out.

“I think Kirby lost his momentum on the restart,” he said. “He’s normally really good on the restarts and it’s always fun to race against him.”

The opening night for the division got off to less than an ideal start when not a single lap was completed when the caution flag waved.

Starting on the front row Willie DeHart and Travis Brown made contact on the front straight and ended against the turn one outside retaining wall. Brown returned to run the feature, but DeHart’s night was finished.

When racing action got started fast qualifier James Kirby, the 2014 rookie of the year, recorded his first ever career win at Anderson Speedway. Parham finished second followed by Jimmy Kirby, Poore and Warner.
Jason Shipp led the entire way in the second heat to record his first ever win at Anderson Speedway, but behind him there was plenty of action.

The driver on the move early in the race was Jeff Hopkins who climbed from fifth to third after three laps by passing Clark and Jamie Ward.

Ward spun on the seventh lap in turn two bringing out the caution flag. On the restart Shipp was able to maintain the lead, but was never able to shake Joe Pulley.

Hopkins, Phil Jenkins and Clark rounded out the top five.