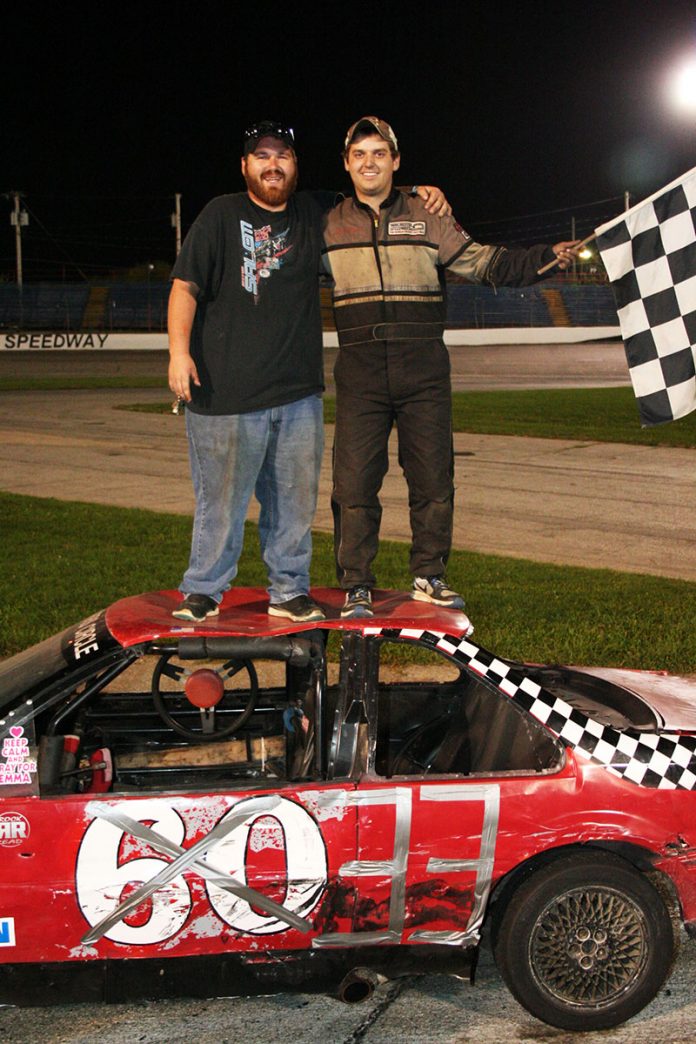 Nick Warner won his ninth feature win in the Front Wheel Drive Figure-8 Division but the championship went to the team of Jeff Williams and Randy Owens.

Warner was ineligible for the title.

Williams entered the night in a tight three-way battle for the title, but Kamden Creek missed the feature with a mechanical problem and Brian McKinney pulled out of competition after three laps.

Williams kept the pressure on Warner but was never able to get close enough to complete the pass. Several times Warner had to slam on the brakes to avoid contact in the cross-over.

That allowed Williams to close the gap but never mount a serious challenge for the victory.

Elliott McKinney led the first lap before being passed by Warner and settled for a third place finish.

Williams, subbing in the car owned by Andy Keller, said Owens did what had to be done all year to win the championship.

“I couldn’t have done it without Andy Keller and Jeff Williams,” Owens said in the Tim Thompson Nationwide Insurance Winner’s Circle. “I had a little mishap and had to put Jeff (Williams) in the car tonight.”

There was plenty of action in the heat race with three different drivers taking turns on the point and a near miss in the crossover determining the winner.

McKinney took the early lead but was passed on the fourth lap by Williams with an inside move on the front straight.

Kamden Creek made steady progress through the field to be in a position to challenge for the win at the finish.

On the penultimate lap Creek passed E. McKinney in turn one and when Williams was forced to slam on the brakes to avoid a collision in the crossover, charged into the lead.

Creek won by less than a half-second over Williams with E. McKinney coming home in third.